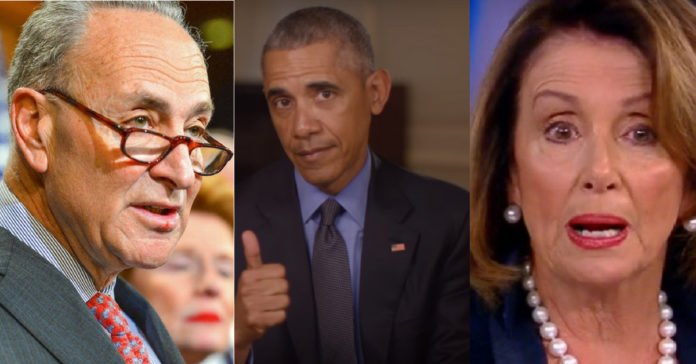 The left went into a shark-like feeding frenzy today after the press conference heard round the world.

Trump’s a stubborn guy and he wants (and he ran on, remember) better relations with Russia.

So no one should have been surprised by what happened today. But that didn’t stop Chuck and Nancy.

Chuck Schumer said on Monday that Americans are wondering if the “only explanation” for President Donald Trump’s performance alongside Vladimir Putin is that the Russian president “holds damaging information over President Trump.”

The Senate minority leader said in a statement that Trump is “putting himself over our country” for declining to criticize Putin during a joint news conference and dismissing intelligence reports on Russian interference in the 2016 elections. Calling Trump’s performance “shameful,” Schumer said Trump “strengthened our adversaries while weakening our defenses and those of our allies.”

“A single, ominous question now hangs over the White House: what could possibly cause President Trump to put the interests of Russia over those of the United States? Millions of Americans will continue to wonder if the only possible explanation for this dangerous behavior is the possibility that President Putin holds damaging information over President Trump,” Schumer said in the statement.

House Minority Leader Nancy Pelosi (D-Calif.) blasted President Trump on Monday following his press conference with Russian President Vladimir Putin, calling for Americans to “vote out the sell-outs” in the GOP and asserting that “the Russians have something on the president.”

The California Democrat said Senate Majority Leader Mitch McConnell (R-Ky.) and House Majority Leader Kevin McCarthy (R-Calif.) aren’t doing enough to push back against the president’s stance on Moscow after he supported Putin’s denial of interfering in the 2016 election.

“If Donald Trump failed to stand up to Putin in front of the press, what makes you think Kevin McCarthy, Mitch McConnell and Republicans in Washington will defend us from a foreign adversary’s attack?” she tweeted. “They’ve done nothing. It’s on us to vote out the sell-outs.”

Just one problem with that…

Obama on Putin meddling in our election: "He denies it. So the idea that somehow public shaming is gonna be effective, I think doesn't read the thought process in Russia very well.” https://t.co/9gexI6YLVW

The president said he did not denounce Russia more forcefully in public leading up to the election because he did not think that would have any effect.

“And I know that there have been folks out there who suggest somehow that if we went out there and made big announcements and thumped our chests about a bunch of stuff, that somehow that would potentially spook the Russians,” he said. “And I should point out by the way, part of why the Russians have been effective on this is because they don’t go around announcing what they’re doing. It’s not like Putin’s gone around the world publicly saying, ‘Look what we did. Wasn’t that clever?’ He denies it. So the idea that somehow public shaming is gonna be effective, I think doesn’t read the — the thought process in Russia very well.”