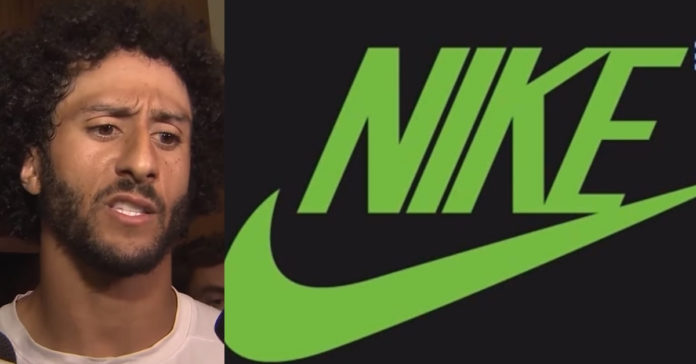 America has spoken and Colin Kaepernick and Nike better listen up. They won’t, to be sure, fresh off all the media love they received for their publicity stunt.

But what goes up must come down and Nike just learned that lesson the hard way.

As reported by Breitbart: A poll taken since the Labor Day release of Colin Kaerpernick’s “Just Do It” ad for Nike sportswear, finds that 36 percent are less likely to buy Nike products.

The poll conducted by Rasmussen between September 9th and 10th, found that 45 percent of respondents have at least a somewhat unfavorable view of former San Francisco 49er quarterback Colin Kaepernick. On the other hand, 40 percent have some level of a favorable view of the former player.

The poll comes on the heels of the September 3 release of Nike’s 30th anniversary “Just Do It” ad campaign. The company chose the controversial former NFL player and immediately plunged itself into controversy.

The Rasmussen poll was taken of 1,000 American adults with a margin of error of plus or minus 3 points.

The poll was released just after the results of a Quinnipiac poll that revealed slightly different results. The Quinnipiac poll taken a few days before the Rasmussen poll found that a majority of voters, 67 percent, believe that NFL players have a right to protest during the national anthem.

The Quinnipiac poll also found that 49 percent approved of Nike’s choice of Kaepernick for its “Just Do It” ad while 37 percent disapproved.

NIKE Joins War Against Police In Most Ironic Way