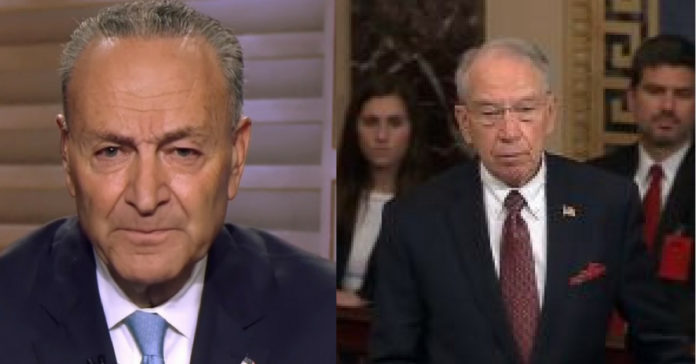 Chuck Schumer is desperate and it shows. He promised the hysterical base that is the left that he would block Trump’s Supreme Court nominee Brett Kavanaugh.

He never really told the base how he would do this as he has no power to stop it, but the left has never been big on facts.

They prefer empty promises, like the kind Obama used to dupe them with for 8 years, to real actions.

Thankfully the GOP prefers to win and Chuck Grassley just showed the hapless Schumer how.

Senate Democrats contend that Republicans are trying to conceal documents about Kavanaugh’s career, which stretches back into the Ken Starr investigation, his three years as staff secretary in the George W. Bush White House, and his appointment to the U.S. Court of Appeals for the D.C. Circuit. Dems argue that their request is identical to the dig Republicans did through the records of nominee Elena Kagan, who was a domestic policy advisor in the Clinton White House and solicitor general under Obama.

Republicans say that the request for millions of documents is a stall tactic intended to derail Majority Leader Mitch McConnell’s (R-Ky.) goal of having a new justice seated by Oct. 1.

Senate Judiciary Committee Democrats last week filed FOIA requests with the National Archives, the Department of Justice, the Department of Homeland Security, and the Central Intelligence Agency, giving the agencies until Sept. 6 to comply with the document requests.

At a Capitol Hill press conference today, Schumer declared that “Republican obstruction requires an extraordinary response, and that’s why we are making this FOIA request.”

“And today we’re announcing that we stand ready to sue the National Archives for Judge Kavanaugh’s full records if necessary, if the FOIA request isn’t granted,” he said. “The American people deserve a methodical and thorough examination of a nominee to the Supreme Court who will yield immense influence on their lives.”

Sen. Richard Blumenthal (D-Conn.) said that the FOIA request “is a last resort.”

“It is unprecedented because this concealing of documents is unprecedented. And when I say concealing of documents, it is literally hiding documents from a relevant period in this nominee’s professional career,” he said.  “Not only an instructive, but what he called the most instructive period of his professional life, three years as staff secretary to the president of the United States. The chairman has shattered all the norms, potentially violating the law, but we need these documents to do our job, literally to perform our constitutional duty to thoughtfully and deliberately consider this nomination.”

Want 2 know the best way 2 evaluate a justice? Ask Sen Schumer “everybody knows” a judge’s record on the bench “is the best way to evaluate a nominee” Good thing Kavanaugh has 12yrs of judic opinions Let’s stop the fishing expedition+review the relevant record ahead of Sept 4 hrg

In other words, you’re out Schumer.