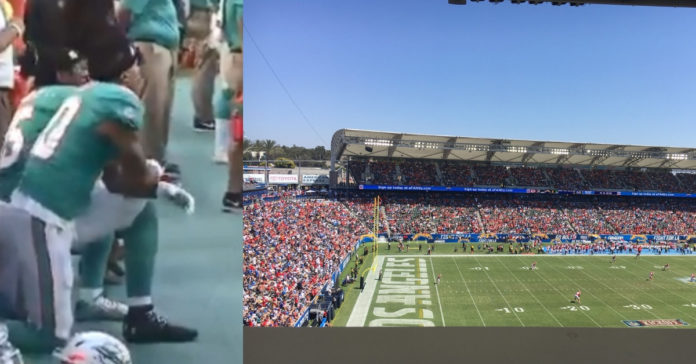 Fresh off a television ratings disaster for the first NFL game of the season the arrogant league was hoping for a strong Sunday rebound.

They didn’t get it. Instead, they protested and disgraced the flag and got a brutal lesson from middle America in the process.

As reported by The Hill: Three Miami Dolphins players protested during the national anthem before their season opener against Tennessee on Sunday.

Wide receivers Kenny Stills and Albert Wilson knelt during the anthem while defensive end Robert Quinn raised his fist, according to The Associated Press.

The protests come as President Trump escalates his attacks on NFL players who don’t stand during the national anthem.

It seems fans decided to vote with their wallets across the league by staying home in huge numbers.

For those interested the crowd with 25 seconds to play in the 1st quarter of the #KCvsLAC game. pic.twitter.com/CslO849362

#Chargers #Chiefs at #StubHub, with 5:22 left in first quarter pic.twitter.com/3owBmWoTUZ