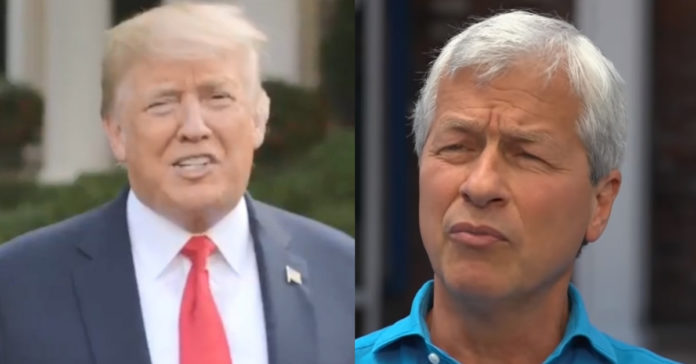 The establishment hates Trump because he is not one of them. No, Trump is more like one if us – he eats the same fast food we eat, he watches the same TV channels we watch, and he is angry at the same corruption that makes us angry.

They hate him for it – his access to the common man – and they use it as a cudgel to bash him.

But they are really bashing us – the establishment thinks we are suckers who exists to pay them. Look at the financial crisis…Jamie Dimon and the rest of Wall Street should have been locked up in jail for what they did, not rewarded.

That Bush and Obama rewarded them while most of America felt they should be in prison is the key point to understand the rise of Trump.

Let me repeat that – this guy and his friends who caused the crash should all be in jail yet he has the stones to attack Trump?

As reported by CNBC:

President Donald Trump hit back at Jamie Dimon on Thursday, calling him a “poor public speaker and a nervous mess” one day after the J.P. Morgan CEO said he was “smarter” than Trump.

In a tweet, Trump also boasted: “I’ve made a lot of bankers, and others, look much smarter than they are with my great economic policy!”

Dimon made his impromptu comments at an event at the bank’s Park Avenue headquarters in New York.

“I think I could beat Trump,” Dimon said. “Because I’m as tough as he is, I’m smarter than he is. I would be fine. He could punch me all he wants, it wouldn’t work with me. I’d fight right back.”

The CEO walked back the comments about an hour later.

“I should not have said it. I’m not running for president,” Dimon, 62, said in a statement.

“The problem with banker Jamie Dimon running for President is that he doesn’t have the aptitude or ‘smarts’ & is a poor public speaker & nervous mess,” Trump said.

The problem with banker Jamie Dimon running for President is that he doesn’t have the aptitude or “smarts” & is a poor public speaker & nervous mess – otherwise he is wonderful. I’ve made a lot of bankers, and others, look much smarter than they are with my great economic policy!