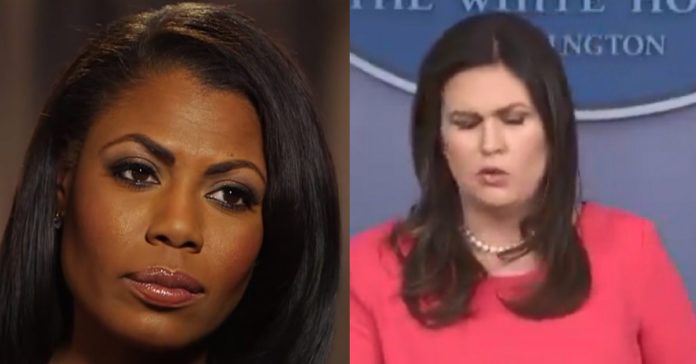 Even the left would agree that Omarosa Manigault Newman is probably the worst human being on the planet.

She annoys and flatters and is just all around greasy and obsequious. But what we didn’t know and what President Trump found out the hard way is that she is disloyal.

She came out to once again profit off her relationship of Trump with a new book and of course, she packed full of media-baiting lies.

She knew the media would run with it if she called Trump a racist and they bought it hook, line and sinker.

But not Sarah Sanders. Sarah just embarrassed Omarosa in the worst way.

The White House on Friday unloaded on a new book written by former aide Omarosa Manigault Newman that depicts President Trump as a racist, saying it is “riddled with lies and false accusations.”

In a blistering statement, White House press secretary Sarah Huckabee Sanders called Manigault Newman a “disgruntled former White House employee” who is “trying to profit off of these false attacks.”

“Instead of telling the truth about all the good President Trump and his administration are doing to make America safe and prosperous, this book is riddled with lies and false accusations,” Sanders said.

The spokeswoman also accused the media of giving her a “platform” after “not taking her seriously when she had only positive things to say about the president during her time in the administration.”

Manigault Newman writes in the explosive memoir that Trump frequently used the n-word while he was the host of the “Celebrity Apprentice,” and that there are tapes to prove it.

While she said she never heard Trump used the word herself, Manigault Newman said that by the time she was fired last December, she had came to view Trump as a “racist.”