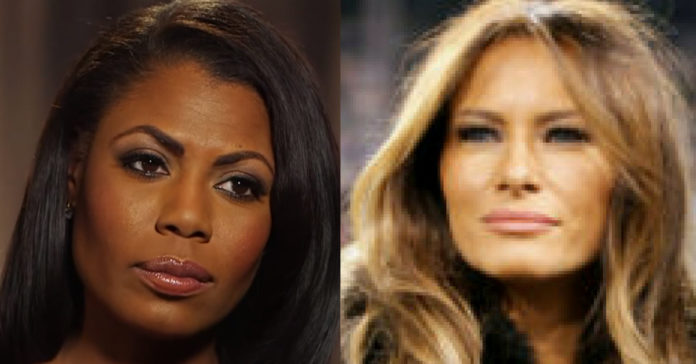 Omarosa has once again taken her rightly place as the biggest b*tch in America. Vindictive and evil, she has no limits.

The truth does not bind her and her venom is nasty and always self-serving.

In short, she is the least credible person on the planet yet the media is treating her like honest Abe Lincoln.

It is all just another desperate attempt to bring down Trump. Melania usually stays above the fray with these political questions but after Omarosa started a vicious rumor about her, she put an end to Omarosa’s reign of terror.

Former White House aide Omarosa has caused an uproar with a new tell-all book about her experiences in the White House titled “Unhinged: An Insider’s Account of the Trump White House.”

One of the most salacious claims in the book involve the first lady Melania Trump. The disgruntled staffer claims that Melania intends to divorce Donald as soon as he is out of office, and that she uses her fashion choices to “punish” her husband.

According to excerpts from Newsweek Omarosa writes “Melania is counting every minute until he is out of office and she can divorce him,” and claims that Melania’s fashion choices of a “pussy bow” at the presidential debate and a jacket that read “I REALLY DON’T CARE, DO U?” when visiting a child detention center were choices the First Lady made to hurt and “punish” her husband.

When asked for comment on the allegations, Melania’s spokesperson Stephanie Grisham bluntly told the Daily Caller that Melania did not interact with Omarosa and that the former staffer is “lashing out” in a “self-serving way.”

“Mrs. Trump rarely, if ever, interacted with Omarosa.  It’s disappointing to her that she is lashing out and retaliating in such a self-serving way, especially after all the opportunities given to her by the President.”

Multiple principles mentioned in the book have denied the claims and allegations made by Omarosa. President Trump said Monday after the revelations “Wacky Omarosa, who got fired 3 times on the Apprentice, now got fired for the last time. She never made it, never will.

She also tried to spread this whopper that Melania was afraid Donald would take away her citizenship if she divorced him (it doesn’t work that way you witch).

Recalling an interview Ivana Trump gave in October 2017 in which she called herself the first lady because she was the president’s first wife, the former “Apprentice” star says she immediately went to the East Wing to see how Melania Trump was reacting to the comments.

“She was furious,” the book says.

“Melania needs to put that Ivana in her place! Those are some fighting words!” Manigault Newman writes of her conversation with East Wing staff, adding that the president should have stepped in to defend his wife.

“Whenever Donald and Melania weren’t on speaking terms — which was very often — he would call Ivana and ask for her advice, “ the book continues. “What could upset the current wife more than the husband calling up the first wife for advice?”

Manigault Newman is deeply critical of the Trump marriage in the book, questioning why the first lady would remain in her union as allegations of the president being unfaithful piled up — accusations the president has denied.

“In my opinion, Melania is counting every minute until he is out of office and she can divorce him,” she writes, warning that the president could seek revenge on his wife if she left him while he’s in the White House by finding a way to “invalidate” her citizenship.