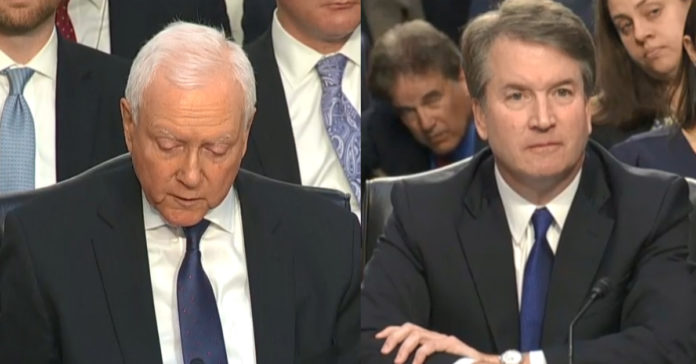 The left brought out all their protesters today to try to stop the inevitable: Judge Kavanaugh’s confirmation.

They can’t stop it so all they are doing is defacing justice itself with these scandalous actions. Thankfully many were arrested and the others got a brutal lesson in manners from Orrin Hatch.

As Hatch delivered his opening statement at the Senate Judiciary Committee hearing, protesters who oppose Kavanaugh’s nomination shouted over the seven-term senator.

Apparently losing patience with one protester, Hatch said, “Mr. Chairman, I think we ought to have this loudmouth removed. We shouldn’t have to put up with this kind of stuff.”

“I hope she’s not a law student,” Hatch added.

Even after that protester was removed, however, others continued to interrupt Hatch as he praised Kavanaugh as a “mainstream” and “indisputably qualified” nominee.

“Mr. Chairman, I don’t know that the committee should have to put up with this type of insolence that’s going on in this room today,” Hatch said at the end of his statement. “And frankly, these people are so out of line, they shouldn’t even be allowed into the doggone room.”