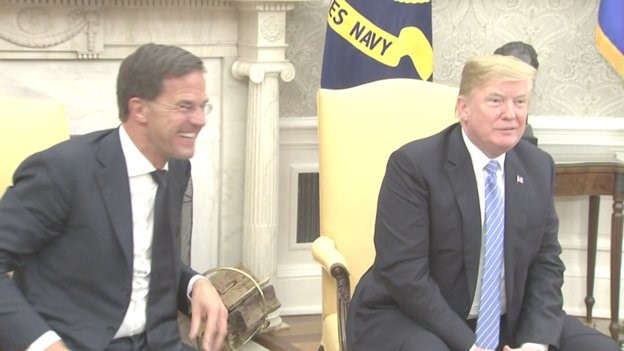 The White House press corps is a thorn in the side of every President, not just President Trump.

That is what the media will not say as they bash Trump over his treatment of the fourth estate.

Ask some of these same reporters about Obama and the honest ones will say Barack went after leakers harder than Trump ever has.

But that does not excuse their rude behavior. From the Daily Caller:

Trump noted that he was happy with the progress of picking a new Supreme Court Justice, noting that he spoke with four potential SCOTUS nominees. “I had a very, very interesting morning,” Trump said, mentioning that he will speak with more potential nominees soon.

Trump also congratulated the new Mexican President-elect López Obrador and said he hoped that he can work with him on border security.

The Prime Minister of the Netherlands, Mark Rutte, was clearly shook by all the reporters shouting questions. Trump told the PM at the beginning of the meeting that it’s like the “Academy Awards” as all the cameras flashed. After the presser, reporters continued shouting at the top of their lungs at the pair of world leaders.

Rutte turned to Trump, bewildered and asking “Is it always like this?” Trump whispered something to him that was inaudible – but caused the both to laugh.

At the end of the photo op, PM Rutte was clearly amused as press aides shouted loudly at the press pool to clear out of the Oval Office. "Is it always like this?" Rutte asked Pres Trump, clearly in disbelief at the lack of decorum. Even Trump cracked a smile. pic.twitter.com/L8ZlmFuHQN