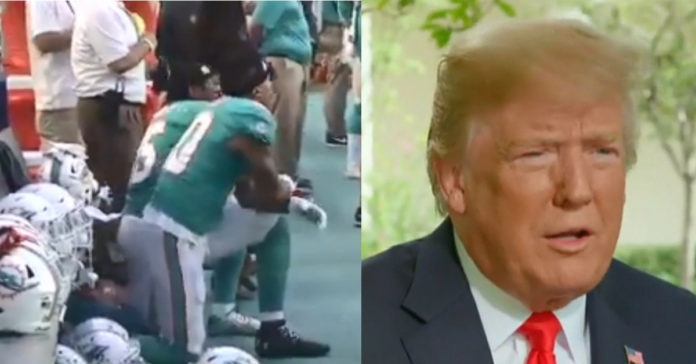 The NFL’s opening weekend is underway and the protestors are out in force. Common sense has left the stadiums and the NFL has not learned their lesson.

Look, Trump is correct about this issue and he has made an offer to them via pardons and commutations that is quite remarkable.

That only Kanye West and Kim Kardashian have taken him up on the offer tells you all you need to know about these spoiled athletes.

As reported by The Hill: Three Miami Dolphins players protested during the national anthem before their season opener against Tennessee on Sunday.

Wide receivers Kenny Stills and Albert Wilson knelt during the anthem while defensive end Robert Quinn raised his fist, according to The Associated Press.

The protests come as President Trump escalates his attacks on NFL players who don’t stand during the national anthem.

Trump in a tweet on Sunday morning knocked the NFL over lower ratings for its first game of the season, which he attributed to the ongoing protests. Players have said the protests are against police brutality and racial inequality.

In contrast, there were no visible demonstrations by NFL players during the national anthem before the NFL season opener between the Atlanta Falcons and Philadelphia Eagles on Thursday night.

Stills, Wilson and Quinn have all indicated they will continue to participate in protests throughout the season, according to the Palm Beach Post.

Stills in a recent interview with the Post said the NFL has mishandled the protests. The league froze a policy banning kneeling or protesting during the anthem following widespread pushback from players and fans.

“I feel like the NFL could’ve done a better job of controlling the narrative from the beginning,” Stills said, according to the Post. “If the NFL would have done something like Nike did — some type of campaign, explaining this whole situation, having his back, supporting us, supporting our First Amendment right — then this thing would be going in a whole different direction. I think we’ve made progress but obviously we have a ways to go.”

Wow, NFL first game ratings are way down over an already really bad last year comparison. Viewership declined 13%, the lowest in over a decade. If the players stood proudly for our Flag and Anthem, and it is all shown on broadcast, maybe ratings could come back? Otherwise worse!