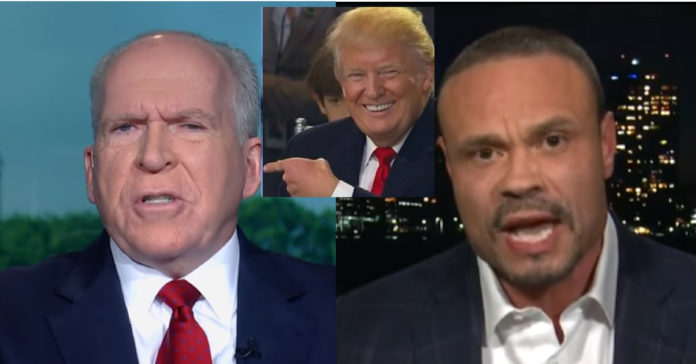 Former Secret Service agent Dan Bongino has had enough of the deep state hacks. He went on Fox and Friends today and went after one of the biggest hacks of them all.

He ripped ex-CIA Director John Brennan and called him a flat out liar.

He called the witch hunt what it is – a scam.

“I grew up in New York City in the streets of Queens there,” said Bongino. “That was — you are getting worked. You are getting screwed so badly the American people by this sham investigation. I have never seen anything like it.”

The case “was founded on a total sham,” he continued.

“We now know that there is Russian collusion with the Clintons and the Democrats, but Bob Mueller’s investigating Donald Trump for it, number one,” said Bongiono. “Number two, the Mueller probe team is stacked with anti-Trumpers, two of whom are lawyers. This is a fact by the way. I encourage anyone to look this up, who actually represented people before hand in the Clinton sphere. They represented Clintontonians involved in the case. This is a total scam. Everybody is getting worked.”

He saved his most trenchant observation for deep state hack number one John Brennan who has been viciously attacking Trump all week.

“No single figure in American history has done more to discredit the intelligence community than this liar,” said Bongino. “Not only is he a liar. He is a liar about being a liar…he has already busted lying. He said he didn’t know about the dossier. Yet, he briefed people up on the hill about elements of the dossier that then appeared in a letter to the FBI. He is lying. He is just making this up.”

“John Brennan, no single figure in American history has done more to discredit the intelligence community than this liar. Not only is he a liar, he’s a liar about being a liar.” Dan Bongino on @foxandfriends

….“$17 million spent, it’s a scam Investigation. Americans are being worked. We now know there was Russian collusion, with Russians and the Democrats. The Mueller team is stacked with anti-Trumpers, who actually represented Clinton people (& gave $’s to Crooked H).” Dan Bongino