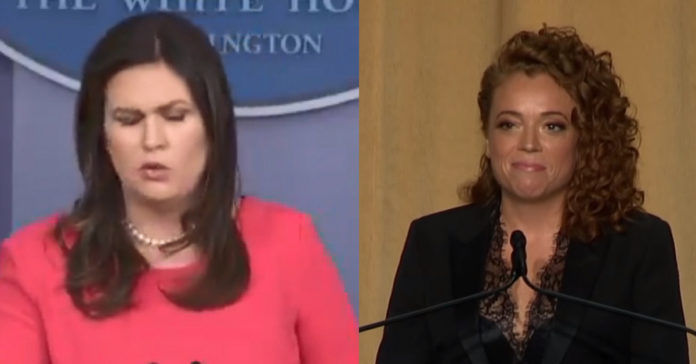 Michelle Wolff was the comic who went very low in her attacks of Sarah Sanders at the White House Correspondents’ Dinner last spring.

Wolf was condemned by all sides, even the left thought she went too far in her attacks – really they were quite vicious and uncalled for.

And then the news broke that she landed a new show on Netflix and that was the last we heard from her.

Until today. When the news broke that her show got canceled because America was turned off by everything about her. America has spoken, and we don’t choose you, Michelle.

From The Hollywood Reporter:

Netflix is pulling the plug on Michelle Wolf’s and Joel McHale’s talk shows.

The two unscripted entries — The Break With Michelle Wolf and The Joel McHale Show With Joel McHale — were both only on the streaming service for a matter of months (the former premiered in May and the latter in February) before executives at the company decided to not bring them back for additional seasons.

Despite plentiful buzz after her controversial turn as this year’s White House Correspondents’ Dinner host, Wolf’s late-night entry failed to garner the kind of viewership that warrants a second season at the streaming giant. The same can be said for McHale’s Soup-esque talker, which offered a mix of greenscreen commentary and pretaped sketches.

Though the streamer has pushed aggressively into the late-night space, greenlighting shows from such comics as Hasan Minhaj, David Letterman, Norm Macdonald and Wolf, it has yet to figure out what a successful topical format looks like on its platform. Chelsea Handler’s since-canceled weekly foray was Netflix’s original attempt, followed by McHale’s series, which Netflix moved from a weekly rollout to an all-at-once episode dump after its premiere.