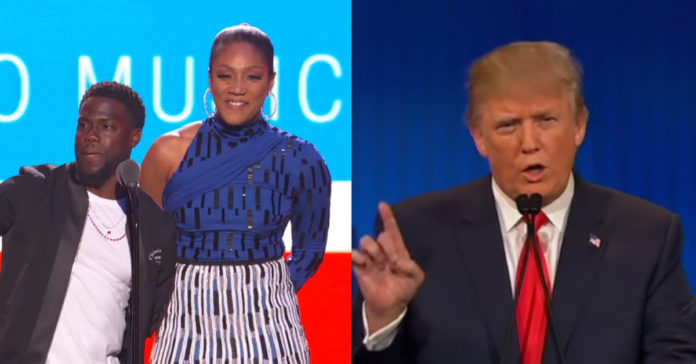 Hollywood went all in the Trump bashing at the MTV Video Music Awards to predictable and humiliating results.

Middle America has spoken and we don’t want politics in our entertainment.

As reported by Fox News: MTV’s Video Music Awards dropped significantly in the ratings department on Monday night compared to last year, as the 2018 version featured an onslaught of political and anti-Trump rhetoric.

The 2018 VMA averaged 2.25 million viewers, which is down 16 percent compared to the 2.66 million people who tuned in to the 2017 show, according to Nielsen. The drop was even more significant with adults age 18-49, with MTV losing 20 percent of the key demo.

The smaller audience witnessed a politically charged show. At one point, Kevin Hart told the audience they were “allowed to kneel,” seemingly referencing how NFL players have been protesting during the national anthem before games.

“[In] this game you’re allowed to kneel,” Hart said while presenting with fellow comedian Tiffany Haddish.

Hart, 39, also said the award show was like “a typical day at the White House.”

“Beefs pop off, bad language, people run to the bathroom and send out crazy tweets,” Hart said. “It’s basically like a typical day at the White House. In your face Trump, suck it.”

Rapper Logic donned a shirt that read “F— the wall” while singing his song “One Day” with Ryan Tedder. The 28-year-old singer was joined on stage by immigrant leaders, parents and children, all wearing T-shirts that read “We are all human beings,” in protest against the Trump administration’s family separation and detention policy.

During the performance, adults and minors were shown being separated on stage by a wall that eventually falls, allowing them to reunite.

From The Hollywood Reporter:

The event falls short of the 2017 ceremony, which had the previous record-low audience.

For the second straight year, the MTV Video Music Awards drew its smallest audience ever.

The awards also aired on a ninth Viacom network, TV Land, for which numbers weren’t immediately available. It is highly unlikely, however, that enough people tuned in there to push the VMAs past their 2017 on-air total of 5.36 million viewers and 2.6 rating in adults 18-49.

The 2017 awards also aired opposite a huge Game of Thrones finale on HBO; the heaviest head-to-head competition on cable Monday was WWE Monday Night Raw on USA (1.1 in 18-49, 3.1 million viewers) and an NFL preseason game on ESPN (0.8, 2.66 million).

The VMAs suffered even steeper declines among MTV’s core viewership of teens and young adults. In the 18-34 demo, the show’s 1.2 rating fell by almost half — 47 percent, to be precise — from 2.2 a year ago. It declined by similar percentages in the 12-34 cohort.

Hollywood Legend Admits Truth, Says Trump Will Go Down As Greatest President In History Of USA

After Bashing President Trump For 2 Years, Hollywood Gets Its Just Deserts From American Public