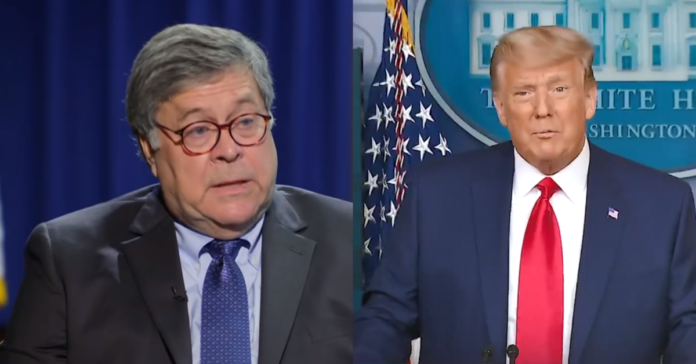 There are dueling reports giving the reasons why Barr is considering leaving early. CNN is reporting that Barr is annoyed with Trump with one source saying that Barr “is not someone who takes bullying and turns the other cheek.”

“He has not made a final decision,” according to the report while the New York Times is reporting Barr is considering leaving not over a feud with Trump but more so because he feels his DOJ has accomplished what he set out to do.

Attorney General William P. Barr is considering stepping down before President Trump’s term ends next month, according to three people familiar with this thinking. One said Mr. Barr could announce his departure before the end of the year.

It was not clear whether the attorney general’s deliberations were influenced by Mr. Trump’s refusal to concede his election loss or his fury over Mr. Barr’s acknowledgment last week that the Justice Department uncovered no widespread voting fraud. In the ensuing days, the president refused to say whether he still had confidence in his attorney general.

One of the people insisted that Mr. Barr had been weighing his departure since before last week and that Mr. Trump had not affected the attorney general’s thinking. Another said Mr. Barr had concluded that he had completed the work that he set out to accomplish at the Justice Department.

But the president’s public complaints about the election, including a baseless allegation earlier last week that federal law enforcement had rigged the election against him, are certain to cast a cloud over any early departure by Mr. Barr.

By leaving early, Mr. Barr could avoid a confrontation with the president over his refusal to advance Mr. Trump’s efforts to rewrite the election results.

Mr. Barr’s departure would also deprive the president of a cabinet officer who has wielded the power of the Justice Department more deeply in service of a president’s political agenda than any attorney general in a half-century.

Conversely, it would please some Trump allies, who have called for Mr. Barr to step down over his refusal to wade further into Mr. Trump’s efforts to overturn the election outcome.

Mr. Barr has not made a final decision, and the prospect of him staying on through Jan. 20 remains a possibility, the people familiar with his thinking cautioned.

Should Mr. Barr step down before the end of the Trump administration, the deputy attorney general, Jeffrey A. Rosen, would be expected to lead the Justice Department until President-elect Joseph R. Biden Jr. is sworn in.