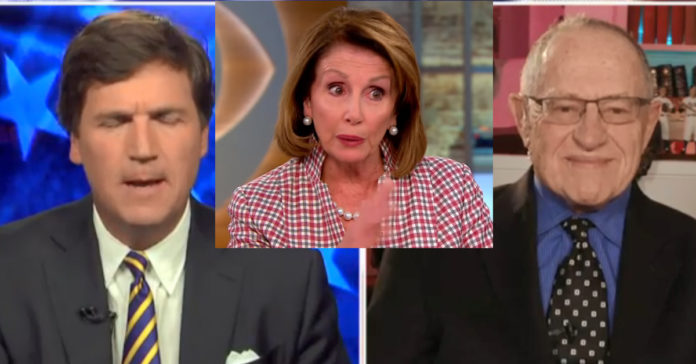 Alan Dershowitz is one of the foremost legal minds in this great country and has been for some time.

In short, when he speaks people listen and what he just said is devastating to the impeachment dreams of Nancy Pelosi.

From Mediaite: Harvard Professor Emeritus and vocal Donald Trump defender Alan Dershowitz appeared on Fox News tonight to downplay the Paul Manafort conviction and Michael Cohen plea, saying that “it is not nearly as deadly, lethal as some have portrayed it as being.”

Dershowitz, who was speaking to Fox News host Tucker Carlson when he made the remarks, did admit that today’s court proceedings are “the beginning of a story that will unravel over time” and that the president “perhaps” violated “election laws,” but he spent the rest of the interview defending Trump amid the scandal.

“Not if it’s unreported,” interrupted Rodgers.

Dershowitz then laid out the “credibility issue” with Cohen who, facing life in prison, would be tempted to say whatever prosecutors wanted him to say.

.@AlanDersh: "Every candidate violates the election laws when they run for president…here they're trying to elevate this into an impeachable offense or a felony against the president." #Tucker pic.twitter.com/PT87wHBn9f

Alan Dershowitz : Trump Now Has Ace In Hole To Play On Mueller