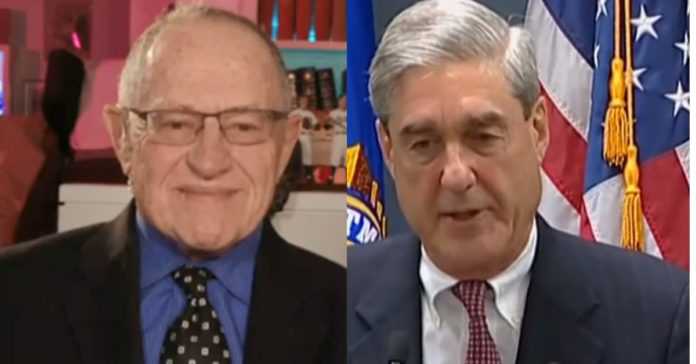 He says Trump in effect has a huge ace up his sleeve in dealing with Bob Mueller and it is a game changer.

Everything goes through Rosenstein – the final report, Mueller’s current actions – and if Rosenstein has a conflict, which is obvious now, he has to recuse.

Which means it is the next man up at DOJ to deal with this and if he or she finds that it is bogus, it is all over.

As reported by The Hill:

Harvard law professor Alan Dershowitz says that President Trump could fight in court to force Deputy Attorney General Rod Rosenstein to recuse himself in the special counsel investigation into Russian meddling in the 2016 election.

Dershowitz made the comments in an interview on CNN’s “Smerconish” after it was reported by The New York Times that Rosenstein brought up the possibility of recording Trump in the Oval Office last year.

Rosenstein has said that he “never pursued or authorized recording the President and any suggestion that I have ever advocated for the removal of the President is absolutely false.”

Dershowitz suggested Saturday that “what [Trump] could do very plausibly is have his lawyers go to court and make a motion to recuse Rosenstein from any involvement in any case involving the president.”

“But second, he has a conflict now because the Times reports that his goal is to be ‘vindicated,’ and the way he can be ‘vindicated’ is by putting all the blame on President Trump,” Dershowitz added in the interview.