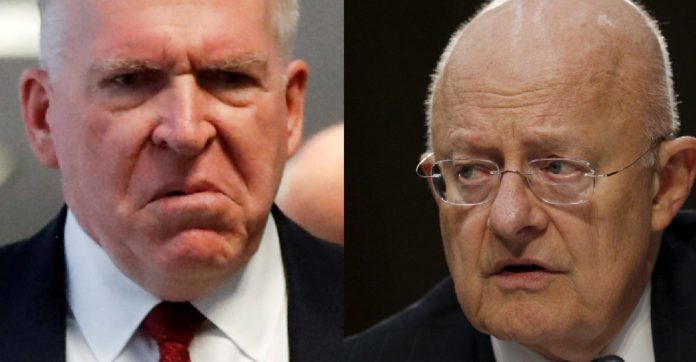 The deep state is on the run and they have no one to blame for their situation but themselves.

Really, did they do a good job of running the world? Income disparity rages across America, stupid wars displace millions causing upheaval across the globe…

Their record speaks for itself and the American people are on to them.

As reported by The Daily Caller: The majority of respondents to a Harvard CAPS/Harris Poll released Monday said former CIA Director John Brennan and former FBI Director James Comey should in fact lose their security clearances.

The poll shows that 59 percent of registered voters agree that Brennan’s security clearance should have been revoked.

Additionally, 64 percent say Comey’s should also be revoked, along with any other FBI official who has been fired for his or her actions or has been demoted in any way.

Further, the majority of respondents, 60 percent, say they believe any former national security official who chooses to become a consultant or TV contributor after his or her time in government, should have his or her clearance revoked.

Comey was fired by President Donald Trump in May 2017, and since then has vocally criticized the president, most notably on Twitter and in his book “A Higher Loyalty.”

Trump questioned Brennan’s credibility and said his behavior was erratic and unprofessional, but critics said the president revoked the clearance because Brennan has been highly critical of Trump and his character.

Brennan’s Twitter shows a nearly obsessive amount of tweets attacking Trump, and he’s done the same on major cable stations such as NBC and MSNBC.

Comey tweeted his comment to Trump revoking Brennan’s clearance, saying Trump “lies to the American people everyday, encourages racism, and is a misogynist,” among other things.