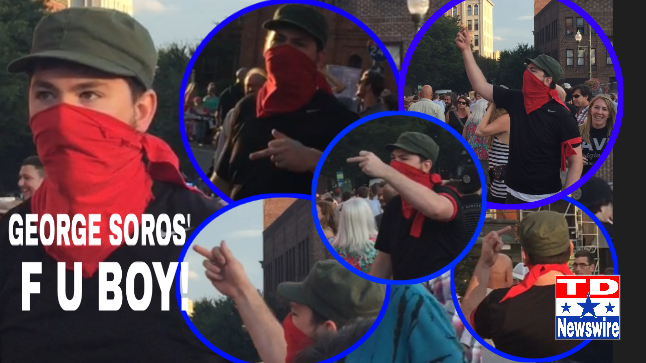 Do you live near Asheville, NC?  Do you know this kid?  Someone needs to tell his Mama what he’s been doing in his spare time. You won’t believe this video. 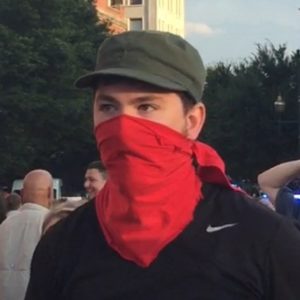 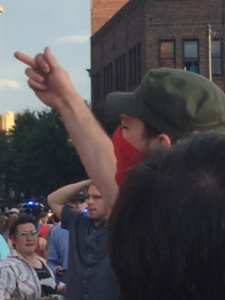 There were approximately 9,000 Donald Trump Supporters at the Trump rally in Asheville, NC. Monday night.   Outside there were approximately 300 protesters.  It really looked like the carnival had come to town.  Clown suits, pig suits, ears stretched out to the ground. In a way is WAS a carnival because the majority kids were hired by George Soros.   Ninety nine percent of them were completely peaceful and did not use vulgarity because those were the rules if they wanted to get paid.   If you watched my other video then you also noticed that they were NOT voting for Hillary.   Imagine that!  Only 4 of 300 I asked admitted to supporting Hillary at all.  (link below)

Now back to F**k You Boy.   There one one kid that really stood out,really out shined his fellow protesters you might say.  This young man covered his face with red bandanna and shouted profanities at every Trump supporter in the crowd.  I call him F U Boy because he dropped the F BOMB over 200 times in the 5 minutes (YES I SAID FIVE) that I observed him.  He is easy to identify even though he was wearing the mask.

BOTH OF HIS MIDDLE FINGERS WERE STUCK IN THE OUTWARD POSITION HERE’S THE VIDEO:

Mr. FU Boy was saying the F word to everyone including many ladies and elderly Trump supporters.   When we confronted him and asked why he was hiding his face he fled fast. Was he a paid George Soros vulgar scumbag or was he a genuine freelance Trump hating protesting vulgar scumbag?  We can’t say for sure but we’re guessing it’s the latter. 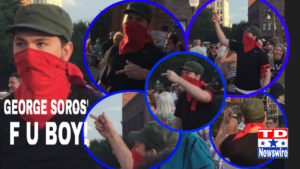 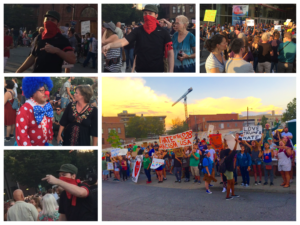 Hey Boy we’re gonna find you’re Mama and tell her so she can wash your mouth out with soap.   Donald Trump doesn’t want foul mouths at his rallies. 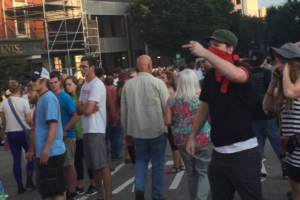 LINK TO OTHER PROTESTER VIDEO,  THEY’RE NOT VOTING FOR HILLARY.  CLICK HERE