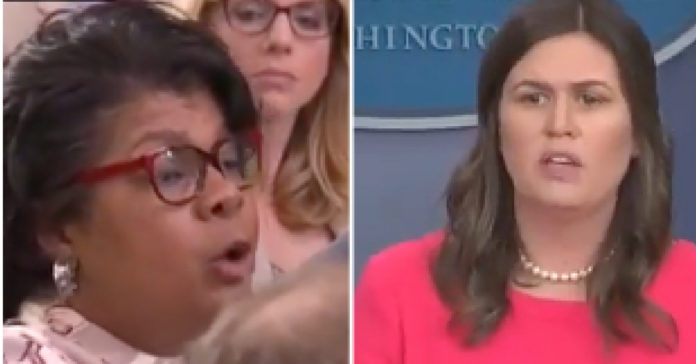 We have gone from tragedy to farce faster than at any time in human history. The tragedy is the constant attacks on Sarah Sanders from darn near everyone in America.

The absolute farce is the new line of attack from April Ryan.  It would be funny if it weren’t so sad.

I guess everything is Sarah’s fault now or Trump’s. It is not logically possible yet here we are with major media outlets blaming Sarah Sanders for everything.

Journalist April Ryan said in a new interview that the White House press secretary Sarah Huckabee Sanders should cover the costs for Ryan’s security detail amid death threats from people who are critical of her coverage of the Trump administration.

“I’ve had some people wait for me outside the White House,” Ryan told The Hollywood Reporter. “There is a concern now. I mean, I’ve had death threats, I’ve had craziness, so I have a real concern.”

“Do I have a bodyguard?” Ryan said. “Yes, I do. Am I paying for it? Yes, I am. And, I think [Sanders] should have to pay for it, especially if she’s stirring it up with her boss.”

“I did not sign up for this. I was just doing a job,” Ryan, the White House correspondent for American Urban Radio Networks, added.

Ryan said months ago that she received death threats after she asked Sanders if President Trump had considered resigning.

“They’re angry. I’ve been getting death threats and we’ve been calling the FBI and I mean, I put one on social media and this is real,” Ryan said at the time to CNN, where she is a contributor.

Ryan, who has repeatedly clashed with Sanders during White House briefings in the past year, is promoting her new book, “Under Fire: Reporting From the Front Lines of the Trump White House.”

When asked why she decided to write it, Ryan told The Hollywood Reporter that she has “been under attack” as she covers the Trump administration.

“And if I don’t tell the story, you won’t get it. So, I’m putting it out there, because people see one side of it. I’m giving you the whole thing,” Ryan said. “The way they’ve treated me for asking questions that are fair and logical.”

“They’re still very angry at me for asking the question, ‘Mr. President, are you a racist?’ And that’s why I’m on a list,” Ryan said in reference to what she later called “The White House blacklist,” which she claims also includes CNN chief White House correspondent Jim Acosta.

“Since when is asking a question of a president making you a criminal? Or making you an ‘enemy of the people?’” Ryan asked.