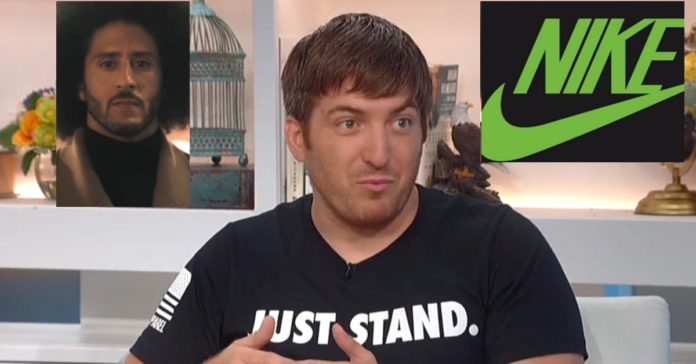 The Nike decision to hire Colin Kaepernick has resulted in many discussions across the country about patriotism and sacrifice.

Some people agree with Colin’s version of a pampered and spoiled athlete’s version sacrifice (hint most do not) while others know the real meaning of such terms.

Tyler Merritt is one of the latter, As reported by Fox News:

An Army veteran called out Nike Saturday on Fox & Friends for featuring Colin Kaepernick at the center of the company’s “Just Do It” campaign.

Tyler Merritt’s company, Nine Line Apparel, has countered Nike by releasing a shirt of its own that reads “Just Stand.”

Merritt, a former Army captain and Nine Line’s CEO, said Saturday, “They decided to take a stance. This is our stand.”

Nike recently announced a multiyear agreement with Kaepernick, including for his own apparel line, video ads and billboards featuring his image, and a contribution to the former San Francisco 49ers quarterback’s Know Your Rights charity.

The company drew immediate backlash after releasing a print ad that stated, “Believe in something, even if it means sacrificing everything.”

Merritt said Saturday that it’s hard to make a parallel between an athlete’s sacrifice and a soldier’s.

“The word ‘sacrifice’ in the military members, it’s something severe,” he said.

He said that Nike’s move to feature a controversial figure like Kaepernick was done with a lack of concern about those who may find the former quarterback’s actions offensive.

“I agree that police brutality is bad, but you know, wearing socks that say pigs…” he said, in reference to when Kaepernick wore socks depicting police officers as pigs.

“Actions speak louder than words,” Merritt said. “If you want to say that you’re promoting social injustice, then actually do something.”

Believe in something, even if it means sacrificing everything. #JustDoIt pic.twitter.com/SRWkMIDdaO

Hey @Nike I guess you made @Kaepernick7 your new “face” of the brand because you love the way his socks look with your shoes? @Reebok here we come. #WeStand @TomiLahren @greggutfeld @kilmeade @RedneckRiviera pic.twitter.com/tgtbl8VFzv