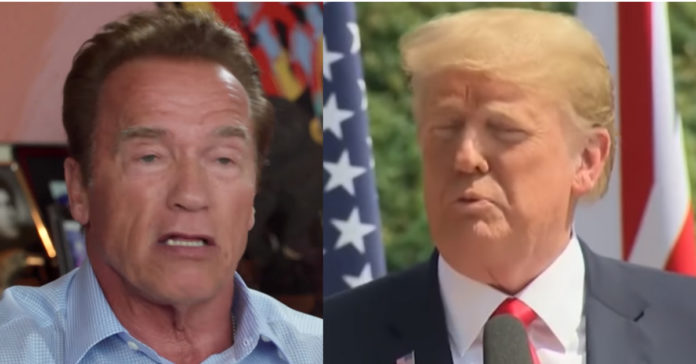 Arnold Schwarzenegger keeps running his mouth at President Trump and his desperation is showing.

Look, Schwarzenegger, America likes what Trump is doing – his approval numbers just shot past even Barack Obama’s for the same time period.

For many reasons but mainly the economy.

“For 48 years – since one of my heroes, then-governor Ronald Reagan, requested it- California has had a waiver from the federal government to clean our own air,” Schwarzenegger stated on Twitter.

“If the President thinks he can win this fight, he’s out of his mind.”

Schwarzenegger continued on to say that he is “sick and tired of these fake conservatives who believe in states’ rights to make their own policies – as long as state policy is to pollute more. If you want to clean up your air, they throw federalism right out the window, I’ve had it with the so-called pro-business conservatives who ignore what actual industry leaders say is best for business.”

“I hope some conservatives with a conscience will act in Washington to defend California’s waiver based on these historic Republican values,” he said. “But if not, I’d remind them that California has won this battle before. We will win again.”

My statement on today’s stupid, fake-conservative policy announcement that no one asked for. pic.twitter.com/ojAhWTFpDM

But in truth, Trump did the impossible – he mad wages rise. That has long been a goal by the left and thought impossible.

Morons like Arnold never found a solution to make wages go up because they were afraid to upset the lucrative relationships that run the swamp and the terrible trade deals they all feed off.

In other words, Arnold and the rest are full of it and Trump is not and that is why Trump and the GOP will win in 2018.