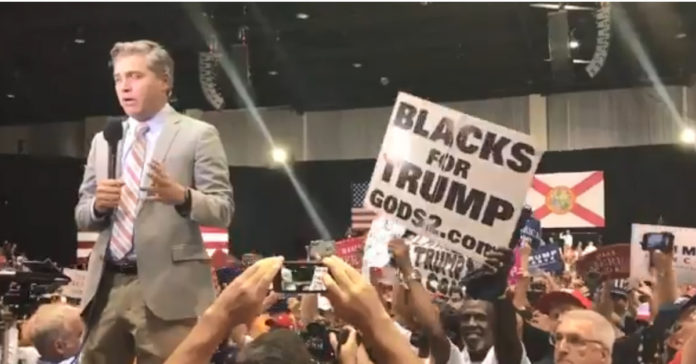 Jim Acosta is another one from the media Trump made famous. Jim and half of the MSNBC lineup, as well as a few from Fox like Megyn Kelly, are all set for life because of Trump.

Will Jim ever thank Trump for it?  No, instead, Acosta just keeps shouting rude questions at Trump wherever he goes. Following him around like a mosquito.

Who just gave a big dose of karma to Jim Acosta as he tried to do a few outtakes for CNN from the floor of a massive Trump rally in Tampa Bay.

As Jim turns on camera to film a few outtakes for CNN the crowd breaks into a raucous “CNN Sucks!” chant.

The crowd is huge and full of energy and this is a few hours before Trump even gets there so make sure you all watch tonight’s show as it promises to be a good one.

.@Acosta is trying to do a stand-up at #trumptampa and the crowd is booing and chanting “CNN sucks” behind him. pic.twitter.com/XiULajB1Li

Just brutal…payback as they say Mr. Acosta is a b**ch. Earlier in the week, Acosta pulled his usual stunt at the White House.

Monday at the end of an Oval Office photo op, White House aides shut down CNN’s White House correspondent Jim Acosta who was trying to ask a question.

White House aides yell at press to leave as journalists try to question President Trump about his lawyer's comments this morning. https://t.co/AeHXfJju1B pic.twitter.com/Kzor7eAfht