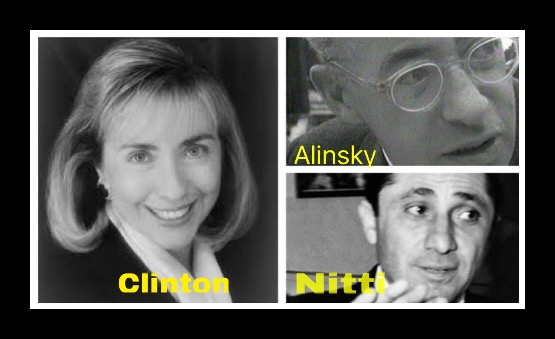 If just 10% of democrats, independents and minorities learn what I learned tonight Donald Trump will WIN by a LANDSLIDE.  While I had read that Hillary and Obama looked up to Saul Alinsky I  believed it to a certain extent but thought there might be a little conservative “spin” to what I was reading.  NOPE.  Think again Danno!

Hillary Clinton was not only a disciple of Alinsky but had a close personal relationship with him.   She never cared about Alinsky’s criminal activities which ranged organizing 1,000’s of Chicago students (he was the original Community Organizer that was a model for Obama’s career in Chicago) in stealing thousands of meals from Chicago Mom and Pop restaurants to Alinsky’s admission (with pride I might add) to being involved from the Chicago Mob and even travelling with Al Capone’s henchman Frank Nitti and their crew to commit assaults, shakedowns and possibly murders.  Not only was Hillary aware that her mentor ran with the Chicago mob, she was inspired by it!   Much of the Alinsky method later adopted by Hillary came from this mob training.

IF YOU’RE VOTING FOR TRUMP-SHARE THIS STORY!!

It is fitting that Alinsky’s MOST famous student Barry Soetoro aka Barack Hussein Obama was a community organizer in CHI town as well.

Four years ago I went to Dinesh D’Souza’s 2016: Obama’s America and did not think much of it. I was already convinced that Obama was a disaster and I thought the movie was too much doom and gloom and made up propaganda and the no liberal or democrat would buy into it.

Here is the Trailer for HILLARY”S AMERICA BELOW.  Not an ad,  This is the movie this article is about.

WATCH TRAILER ABOVE.  NOT AN AD.  I PUT IT HERE

I did not even remember the name of the 2012 film but looked it up as soon as I returned from from seeing HILLARY”S AMERICA tonight.  For the LOVE OF YOUR COUNTRY everyone must see this film and bring SOMEONE WITH YOU (preferably undecided or a Trump skeptic).

The preview above shows nothing about the Alinsky details above.  There is so so much more to the movie from the racist origins of the Democratic Party to Clinton’s virtual theft of money intended for the poor people in earthquake devastated Haiti and Haitians picketing daily outside the Clinton foundationl

I going to see this film again tomorrow folks!  It’s that powerful.  Go see it and BRING A FRIEND!    More to follow! Dan