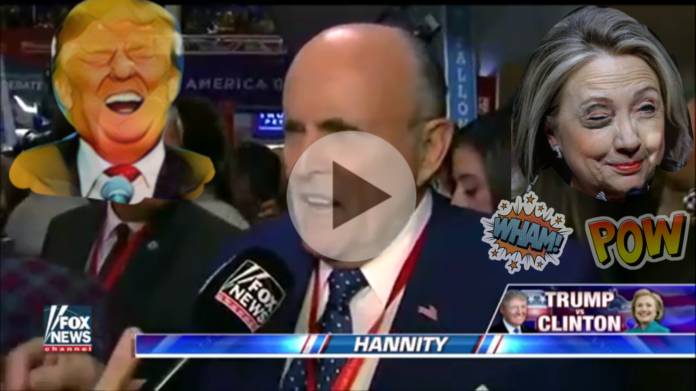 There’s only one way to describe Rudolph Giuliani after the debate last night between Donald Trump and Hillary Clinton and that is exuberant.  Well, I guess there’s more than one way to describe him. You could say he was as happy as a clam. I tell you what let’s go with just giddy.   And he had every right to be.  Donald Trump hit a grand slam homerun in the debate last night apologizing for and overcoming the issue of the video tape from 11 years ago and then pretty much beating Hillary at her own game throughout the entire debate.  Check this video with Rudy talking with Sean Hannity after the  debate. Please share it with everyone you know time is running out we need to keep the Trump Train rolling….. SEE VIDEO BELOW

“This could be one of the biggest knockouts I’ve seen in a presidential debate. I don’t ever think I’ve seen one candidate dominate the other candidate more. She was completely on the defensive the entire night.”  Rudy G.

“She was the one that began the unrelenting vicious,nasty, horrible attack on him. So I think The way he answered it, he apologize, but I think he also put it in perspective. We’ve got a world in which people are getting killed all over the world. We’ve got more Islam Eric terrorist attacks in the last 10 months that we’ve had since September 11, all over the world including the United States. We’re waiting for the next city to get attacked. We have no plan, it’s obvious from her ridiculous answers. We have no plan in Syria. She doesn’t know what the heck she’s doing in Syria. I mean she has no idea…….”  Rudy G.