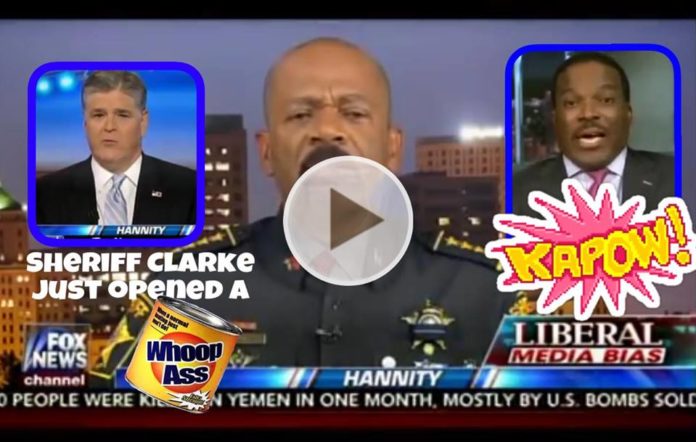 Sheriff David Clarke, one of Donald Trump’s biggest supporters during his historic run for the White House, was on the Sean Hannity show again this week.  As the big “fake news” frenzy came  to a head over the past few weeks, Sheriff Clarke has been very outspoken with his opinion that “Fake News” was born in August of 2014 when the friend/robbery acompliss of Micheal Brown, the man killed by a police officer defending himself, came out to the news media with outragous lies about what happened.  (VIDEO BELOW) 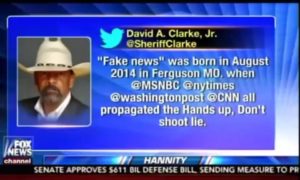 Within hours the lying liberal MSM (mainstream media) took the “fake news” story and ran with it.  Soon the George Soros’ supported Black Lives Matter group got involved and used this “fake news” to wreak havoc and destroy property all over our great land. (VIDEO BELOW)

Here’s Sheriff Clarke with Sean Hannity and liberal appoligist lawyer Eric Guster.  I love how Sheriff Clarke never backs down and always maintains his cool. Check this out…(VIDEO BELOW)

To Eric Gusser’s credit he does admit that “hands up don’t shoot” is a lie.  I guess that’s something.

However, I won’t be as polite as Sheriff Clarke.  Someone who can’t figure out that the articles in The Onion are satirical and gets fooled more than once, maybe twice, are morons.  Plain and simple.  I appologize to any morons I may have offended but it’s true. 🙂

The “hands up don’t shoot” fake news out of Ferguson Missouri continues to this day and cops are still being killed across this country based off of that fake news story.

Please click below to send a prayer to Donald Trump and his family.  🙂

A Prayer for the Safety of Donald Trump and Family: Please READ, PRAY and SHARE this. Let’s get this out to 10,000,000 people. Thank You Prayer Warriors! God Bless!!