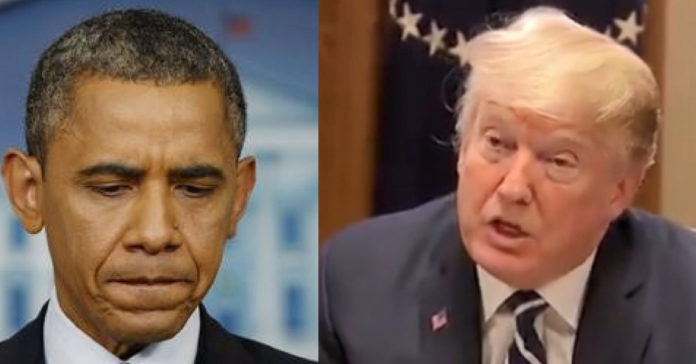 Barack Obama hangs his head in shame after the awful truth was just delivered to him in the most devastating fashion.

Fact is, Obama did little to help the African American population…in a way he betrayed them.

But not Trump, as Pastor Darrell Scott makes clear.

A black pastor who’s a longtime supporter of President Trump is saying that Mr. Trump is more “pro-black” than former President Barack Obama, the nation’s only black president.

Pastor Darrell Scott of Cleveland, co-founder of Mr. Trump’s National Diversity Coalition, is one of several dozen inner-city faith leaders working with the White House on prison reform and other initiatives to help urban America.

“This is probably going to be … the most pro-black president I’ve seen in my lifetime,” Mr. Scott said Wednesday in an Oval Office meeting with the president. “This president actually wants to prove something to our community, our faith-based community and our ethnic community. The last president didn’t feel like he had to.”

Mr. Scott said of Mr. Obama, “He felt like he didn’t have to prove it. He got a pass. This president, this administration is probably going to be more proactive regarding urban revitalization and prison reform than any president in my lifetime.”

During the meeting, Mr. Trump discussed the administration’s prison reform efforts, including a bipartisan prison reform bill passed by the House in May.

“African-American and Hispanic unemployment rates have reached the lowest levels in recorded history,” the president said.

He added that the prison reform effort is devoted in part to making sure that former inmates can find work.

“When we say hire American, we mean all Americans,” Mr. Trump said.

During his campaign in 2016, Mr. Trump accused Democrats of doing too little to help urban communities and often asked African-American voters to support him, saying “What do you have to lose?”

But during his administration, Mr. Trump also has roiled some in the black community by clashing with the NFL over protests by black athletes during the national anthem, among other controversies.