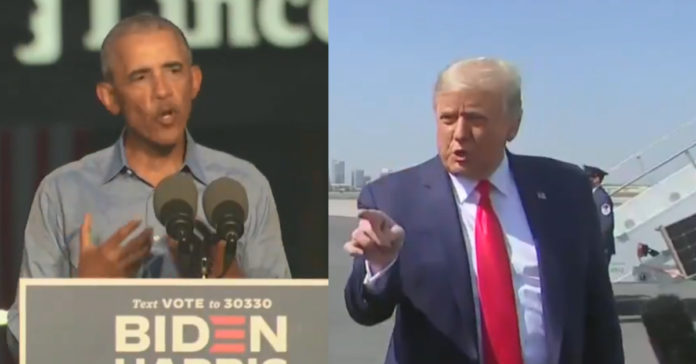 Barack Obama hit the campaign trail for Joe Biden and spent most if his time attacking President Trump, mocking Trump’s TV ratings and accusing him of having a secret Chinese bank account.

Barack said he “came to admire Joe as a man who has learned early on to treat everyone that he meets with dignity and respect.”

“Trump hasn’t shown any interest in doing the work, or helping anybody but himself and his friends, or treating the presidency, like a reality show that he can use to get attention,” Obama said.

“And by the way, even then his TV ratings are down. So you know that upsets him.”

“I get this president wants full credit for the economy he inherited, and zero blame for the pandemic he ignored,” Obama said.

“You know what? The job doesn’t work that way. Tweeting at the television doesn’t fix things.”

“But the thing is this is not a reality show. This is reality, and the rest of us have had to live with the consequences of him, proving himself incapable of taking the job seriously,” he said.

“Listen, can you imagine if I had had a secret Chinese bank account when I was running for reelection?” Obama asked.

“You think Fox News might have been a little concerned about that? They would have called me Beijing Barry.”

His reference to Trump’s “secret Chinese bank account” was to a story in the New York Times that the president maintains an account in the country. Trump has slammed Biden as someone who is beholden to China, and has targeted Biden’s son Hunter for his business dealings there.

An attorney for the Trump organization, Alan Garten, told the Times that Trump’s company opened the account in China to pay local taxes there and they pursued business opportunities there.

“No deals, transactions or other business activities ever materialized and, since 2015, the office has remained inactive,” Garten told the Times. “Though the bank account remains open, it has never been used for any other purpose.