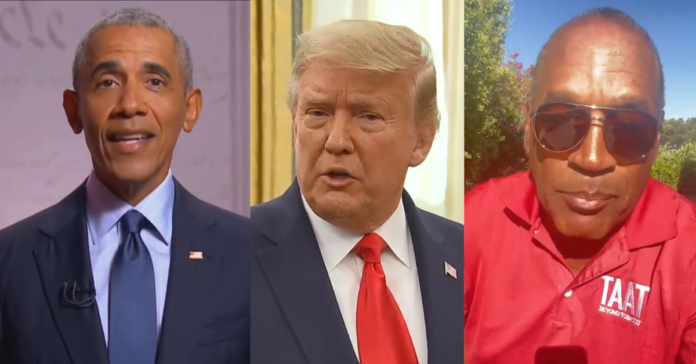 Rhodes worked for Obama from 2009 to 2017 and details Obama’s “black humor” about Trump’s improbably political victory. Obama said: “Trump is for a lot of white people what O. J.’s acquittal was to a lot of black folks – you know it’s wrong, but it feels good.”

Rhodes goes after Trump himself in his new book writing that “America had helped shape the world we lived in before descending into the cesspool of the Trump years.”

“We now had a government that was busy radicalizing a huge swath of American society, with pockets of the country turning to violent white supremacy or a QAnon conspiracy theory positing that America is secretly run by a cabal of child sex traffickers,” he writes.

Rhodes does not blame Trump for everything like many other pundits. He wrote, “the invasion of Iraq introduced a destabilizing new normal to global politics. Laws and norms were for the weak, and the strong could do anything they wanted.”

The NFL superstar’s acquittal in the highly-publicised 1995 murder trial divided the United States with jubilant reactions among members of the black community and widespread disapproval among white people.

Initial polling showed that 70 percent of black people agreed Simpson hadn’t murdered his ex-wife Nicole Brown and her friend Ron Goldman, while 75 percent of white people disagreed with the verdict.

The celebrations in the streets following the trial came four years after the savage beating of Rodney King by the LAPD, which sparked five days of rioting in Los Angeles.

Simpson was found responsible for the brutal stabbings in a civil suit brought two years later, but America’s split reaction to the first trial remains a point of fascination in the study of racial inequity.

'Trump is for a lot of white people what O. J.'s acquittal was to a lot of black folks' https://t.co/qyClGq2m03

'Trump is for a lot of white people what O. J.'s acquittal was to a lot of black folks – you know it's wrong, but it feels good' said Barack Obama, according to Ben Rhodes https://t.co/FHICHObXvI