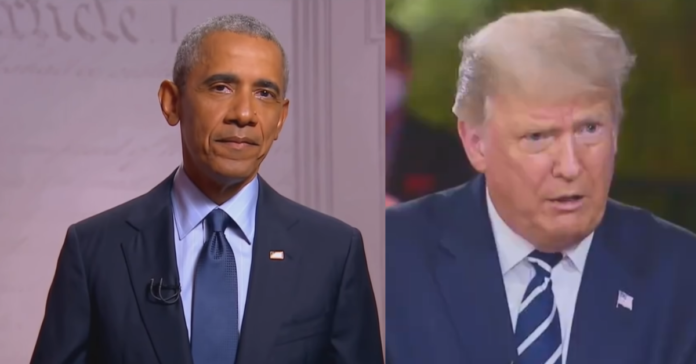 Barack Obama trashed POresidnet Trump and his entire administration and put on an arrogant display on Colbert’s show.

“This would have been hard for anyone,” Obama said. But “if we had done the work that was not rocket science – we’re not talking about inventing vaccines, although I’m glad to see the vaccine is now coming on board.”

“But preliminarily communicating effectively, respecting the science, not undermining the leading epidemiologist in the country and saying he’s an idiot, being consistent in terms of masks and social distancing, not suggesting that this is some act of oppression but rather just a commonsense thing to prevent people from getting sick.

“Had we just taken those steps, there is no doubt that we would’ve saved some lives and ironically, the economy would be better.”

“You couldn’t make up some of the stuff that you’re seeing,” Obama told Colbert.

“And it is to the detriment of the country. But as you said. It runs contrary to what would have been smart politics if the Republicans wanted to maintain the White House.”

“That was a chilling moment for me to watch,” said Colbert of Trump winning, “because I perceived in that moment the dignity of the office, or, rather, the trappings of dignity and status that rightly falls upon the person who holds the office in that moment – and I saw the way, or rather I had an emotional flash of all the ways that could be abused over the next four years.”

“Were you having a similar feeling in that moment?” Colbert asked Obama, who said, “It was a concern.”

Colbert asked, “And was that concern borne out over the next four years?” Obama answered, “Exceeded.”