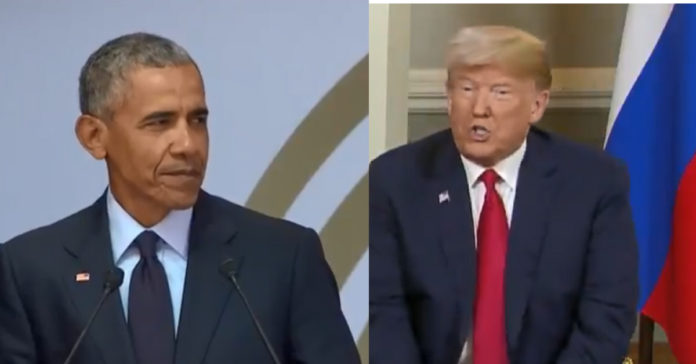 Former President Barack Obama told a massive crowd at the Nelson Mandela Annual Lecture in Johannesburg, South Africa, on Tuesday that we are living in “strange and uncertain times.”

“The strange and uncertain times we are in — and they are strange, and they are uncertain — each day’s news cycles bringing more head spinning and disturbing headlines, I thought maybe it would be useful to step back for a moment and try to get some perspective,” Obama said in the opening of his speech.

Obama reflected on how far the world has come in the last century, saying it could offer a “road map for where we need to go next.”

“That was the world just 100 years ago. There are people alive today who were alive in that world. It is hard then to overstate the remarkable transformations that have taken place since that time,” he said.

“We also have to recognize all the ways the international order has fallen short of its promise. In fact, it is in part because of the failures of governments and powerful elites to squarely address the shortcomings and contributions of this international order that we now see much of the world threatening to return to an older, a more dangerous, a more brutal way of doing business,” he said.

Former Pres. Barack Obama says we are in "strange and uncertain times": "With each day's news cycles bringing more head-spinning and disturbing headlines, I thought maybe it would be useful to step back for a moment and try to get some perspective" https://t.co/s4drXPlcRD pic.twitter.com/AWxnanNsNf

Former U.S. President Barack Obama on Tuesday took aim at “strongman politics” in his highest-profile speech since leaving office, urging people around the world to respect human rights and other values now under threat in an impassioned address marking the 100th anniversary of anti-apartheid leader Nelson Mandela’s birth.

While not mentioning his successor, President Donald Trump, by name, Obama’s speech in South Africa countered many of Trump’s policies, rallying people to keep alive the ideas that Mandela worked for including democracy, diversity and tolerance.

He targeted politicians pushing “politics of fear, resentment, retrenchment,” saying they are on the move “at a pace unimaginable just a few years ago.”

He attacked “strongman politics,” saying that “those in power seek to undermine every institution … that gives democracy meaning.”

Obama added: “I am not being alarmist, I am simply stating the facts. Look around.” He also spoke up for equality in all forms, saying that “I would have thought we had figured that out by now.”