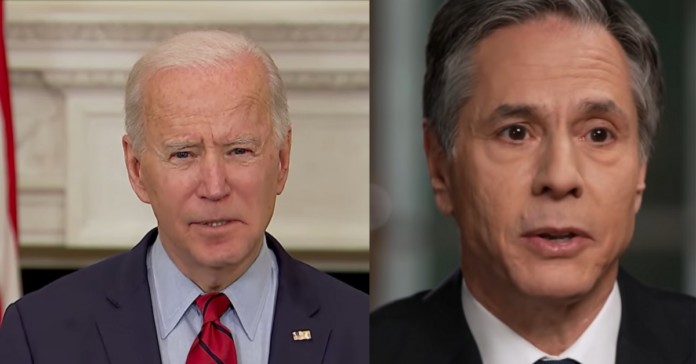 A source within the Biden State Department just leaked a memo to Human Events that shows that “Diplomatic and Consular posts” are being encouraged to show support for Black Lives Matter on Tuesday, May 25, to mark the one-year anniversary of George Floyd’s death.

The leaked memo says, “The Department supports the use of the term ‘Black Lives Matter’ in messaging content, speeches, and other diplomatic engagements with foreign audiences to advance racial equity and access to justice on May 25 and beyond. We encourage posts to focus on the need to eliminate systemic racism and its continued impact.”

The memo reads: “Summary: May 25 marks one year since the brutal murder of George Floyd by police officers in Minneapolis, Minnesota. Last year, the horrific video of Mr. Floyd’s final 9 minutes and 29 seconds went viral and spurred Black Lives Matter protests worldwide, in response to his senseless killing and to demand an end to systemic racism and police brutality. One year later, many in the international community will honor Mr. Floyd and acknowledge the long journey nations face to advance racial justice. Leading up to May 25, the Department has issued guidance on the use of Black Lives Matter language, banners, and flags. End Summary.

(U) May 25 marks the one-year commemoration of George Floyd’s murder. For 9 minutes and 29 seconds, the world saw firsthand how police officers brutally took the life of an unarmed Black man in the United States. These viral images ignited national and global Black Lives Matter (BLM) protests and demonstrations. This tragedy joined a long line of Black men and women who have suffered at the hands of police brutality. These national and global protests sparked a movement to confront systems perpetuating deep-seated inequities rooted in colonialism and the oppression of racial, tribal, ethnic, and other minority communities. Mr. Floyd’s murder prompted an international outcry to seek racial justice and equity by dismantling systemic racism and eradicating police brutality affecting communities of color, most acutely, people of African descent.

(U) On January 20, as one of his first official actions, President Biden issued Executive Order 13985 to advance racial equity and support for underserved communities (reftel 21 STATE 47544). This effort is a top priority for the Administration’s domestic and foreign policy; the United States cannot credibly message on human rights abroad if it does not address these same issues at home. To achieve his policy objectives, President Biden issued several additional executive actions to support underserved communities and advance racial equity, which notably include: • Memorandum Condemning and Combating Racism, Xenophobia, and Intolerance Against Asian Americans and Pacific Islanders in the United States • Executive Order #14020 on Establishment of the White House Gender Policy Council, and • Presidential Memorandum on Advancing the Human Rights of Lesbian, Gay, Bisexual, Transgender, Queer, and Intersex (LGBTQI+) Persons Around the World.

(U) According to the Office of U.S. Special Counsel, “As a social movement, BLM gained prominence following a series of high-profile killings of Black Americans in 2013 and 2014 and, in particular, the acquittal of George Zimmerman for the killing of Trayvon Martin. The movement appears to have begun organically on social media. The phrase ‘Black Lives Matter’ then became a rallying cry for protesters and organizations seeking to raise awareness of, and respond to, issues associated with racism in the United States. BLM is thus an umbrella term for a constellation of ideas, objectives, and groups. There is no ‘leader’ of the BLM movement. Rather, there are numerous organizations that use BLM terminology to varying degrees, including some whose names include the phrase ‘Black Lives Matter.’ Of these, the most prominent is the Black Lives Matter Global Network (BLMGN).”

Use of Black Lives Matter Language in Diplomatic Engagements

(U) The United States remains concerned about the racial inequities of underserved communities, both domestically and abroad. The Department supports the use of the term “Black Lives Matter” in messaging content, speeches, and other diplomatic engagements with foreign audiences to advance racial equity and access to justice on May 25 and beyond. We encourage posts to focus on the need to eliminate systemic racism and its continued impact.

(U) Any BLM-related displays within the interior of the mission, or exterior displays other than the display of a BLM flag on the flagpole (e.g., a banner over the door, BLM spotlights, projections, etc.) are at the Chief of Mission’s discretion.

(U) As outlined below, Chiefs of Mission may decide to hang BLM flags, as appropriate and depending on local context. This cable constitutes a blanket written authorization for calendar year 2021 from the Under Secretary for Management (M) to display the BLM flag on the external-facing flagpole to any Chiefs of Mission who determine such a display is appropriate in light of local conditions. This is an authorization, not a requirement.

(U) U.S. law at 4 U.S.C. section 7(f) provides that “[w]hen flags of States, cities, or localities, or pennants of societies are flown on the same halyard with the flag of the United States, the latter should always be at the peak. When the flags are flown from adjacent staffs, the flag of the United States should be hoisted first and lowered last. No such flag or pennant may be placed above the flag of the United States or to the right of the U.S. flag.” The Black Lives Matter flag, and/or any other types of affinity flags, should be treated as pennants of societies in accordance with this provision, and accordingly, when displayed alongside the U.S. flag either indoors or outdoors, should always be placed in a subordinate position. Regarding the external, public-facing flagpole of all U.S. missions, the written approval of the Secretary, through the Under Secretary for Management (M), is necessary to display any flag other than the U.S. flag, a Foreign Service flag, or a POW/MIA flag. As noted above, this cable constitutes blanket written authorization to display the BLM flag on the external-facing flagpole during calendar year 2021.

(U) Posts are strongly encouraged to make full use of Department and Interagency tools and resources to promote policy objectives to advance racial equity and support for underserved communities throughout the year, including with a particular focus on May 25 and during June to commemorate Juneteenth and lesser-known racially motivated attacks such as the Tulsa Race Massacre – the 100th anniversary of which will take place May 31 – June 1, 2021. On May 24, GPA will release a compilation video featuring messages from activists around the world on the importance of global racial justice as part of a playbook with language for the anniversary of George Floyd’s murder. This video compilation will also feature senior Department leaders to demonstrate the Administration’s commitment to racial equity and support for underserved communities.

(U) Posts may pull from DRL’s library of evergreen content, including its civil rights toolkit and its Juneteenth toolkit, the latter of which will have new material in early June. DRL is creating a mini toolkit to commemorate the 100th anniversary of the Tulsa Race Massacre and will send that to Posts during the last week of May. Posts should also look for articles from GPA’s Share America office on both topics. Content Commons may also contain resources. Public Affairs sections should leverage ECA programs to advance this priority at post. The following are a few programming suggestions: • Use resources at American Spaces, including digital resources; • Work with Alumni Coordinators to engage networks of alumni and current U.S. and incountry exchange participants to draw on their experience and expertise; • Hold open conversations with target audiences using ECA-curated racial inclusion films; • Request an in-person or virtual expert from the ECA U.S. Speaker Program, actively recruit professionals for International Visitor Leadership Program (IVLP) and IVLP On-Demand Programs from underserved communities as well as those working on efforts advance racial equity incountry. It is important for us to continue planning events, activities, and messages to demonstrate the commitment of the U.S. government and efforts by American communities to overcome racism, including by acknowledging historical events and tragedies and their lasting impact today.

(U) The Department stands ready to assist Posts in their efforts to develop and implement equity-related programming, outreach, and events.  Posts are requested to use the Diversity and Inclusion (KDNI) tag when reporting these activities via front-channel as appropriate. The Deputy Secretary for Management and Resources, the Chief Diversity and Inclusion Officer, and regional bureaus will collect information to be included for reporting to the White House required by E.O. 13985 to advance racial equity and support for underserved communities.

Blinken’s action request states the policy objective of the US govt is to promote ‘racial equity’ and ‘global racial justice’ pic.twitter.com/jBKqBHLjQs