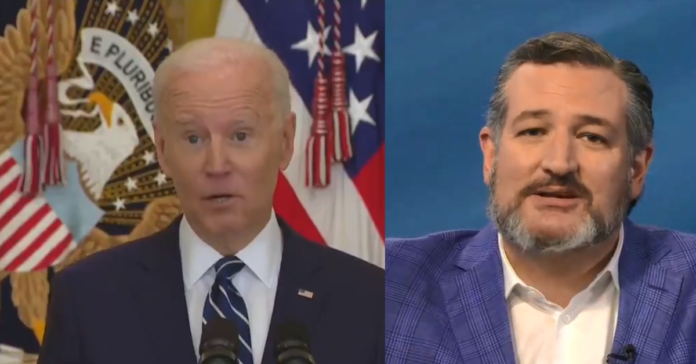 Texas Senator Ted Cruz led a group of GOP lawmakers down to the southern border to find out what in the heck was going on. They brought back bad news on multiple fronts but the most shocking was when a Biden staffer tried to get the GOP Senators to delete their photos of the visit.

Sen. Mike Braun, R-Ind., dropped the dime on the Biden’s attempt to “muzzle” the GOP Senators.  “There was one of Biden’s representatives. I felt sorry for the lady because she actually talked to me about deleting a picture, but by the time she got to me, all those other pictures were taken, and that shows you the hypocrisy,” Braun said.

“None of us would have gone down there if we were going to be muzzled,” added Braun.

“All of a sudden to hear from the other side of the river taunting from the smugglers and coyotes, most of it in Spanish, telling the border guards that whatever you do, we’re coming,” said Braun about what he saw.

“That kind of hit home in such an anecdotal way because it is one story that kind of is a metaphor for what’s happening all up and down the border,” he said.

“A big welcome sign was put out,” said Braun. “I think it was a political blunder.”

“The Border Patrol said the No. 1 thing that’s worked to help us would be the wall. Complete it. “Of course, can you imagine the egg on his face if Biden said we’re going to complete the wall, fill in the holes, make the gates work?

“I don’t think they’ll do any of that, so I think they’re going to die on this hill,” he said.

Braun, after visiting the facility, penned a letter to the president imploring him to visit the border.

The letter, obtained first by Fox News, which includes pictures Braun took Friday during his visit of a U.S. Customs and Border Protection facility in Texas.

The images show migrants jammed into pods at the processing facility and children sleeping on mats on the floor.

“The crisis surrounding this surge makes it a moral imperative for you to see firsthand what is happening—and not the sanitized version of the border tour taken by some of my congressional colleagues,” Braun wrote. “Having personally gone this week, I can testify to this being an inhumane, unsustainable and dangerous situation.

There were more than 18,000 unaccompanied minors in either Border Protection or Health and Human Services custody as of Thursday, according to homeland security records.

By law, children are not supposed to stay in the processing facilities for more than 72 hours before being transferred to HHS shelters specifically designed to care for children. But the surge of migrants at the border has overwhelmed the processing centers and caused delays.

“I know why President Biden doesn’t want the media to be here – because we do have an open border,” Sen. James Lankford, R-Oklahoma said Friday after visiting the facility.

Thank you to our men and women in Border Patrol who work day and night to keep drugs off our streets, stop human traffickers, and keep our country’s southern border safe and secure. We thank you! ⁦@SenateGOP⁩ pic.twitter.com/2DNgPRgxpB