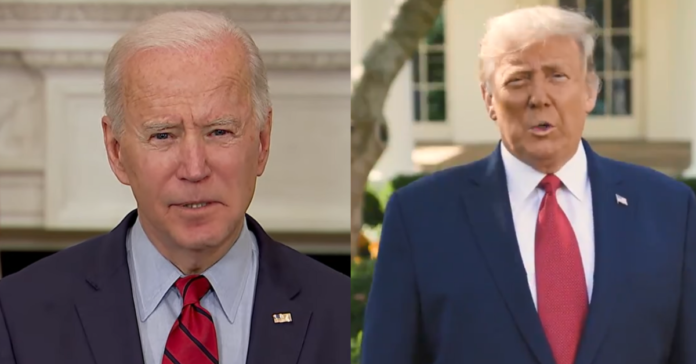 Former President Trump put Joe Biden on notice when he told Judge Jeanine Pirro Saturday night he was going to visit the U.S. border with Mexico to put pressure on the Biden admin to reinstate the successful policies of the past. Biden finally responded and took a swipe at Trump in the process calling him the “other guy.”

A reporter asked Biden: “We’ve seen Republican senators at the border. Former President Trump said he’s been asked by some border patrol to go to the border. Do you think that would be productive? And when any timetable on when you might go?”

Biden responded: “We are putting in place a plan that I feel very confident about and uh, I don’t care what the other guy does.”

Trump told Pirro: “Well, a lot of people want me to. The Border Patrols and all of the people of ICE, they want me there, they’ve asked me to go and I really sort of feel I owe it to them, they’re great people, they’re doing an incredible job.”

“I’d love not to be involved. Somebody else is supposed to be doing it,” Trump added. Pirro then asked when Trump would go to the border. “Over the next couple of weeks,” Trump said.

“The Border Patrol wants me to go, uh, probably over the next couple of weeks. I don’t think there’s a rush for me to go. I’m not looking to have a race, (with Biden to the border) I’m looking to have a problem solved.”

“I’m not sure that I really should do it, Jeanine, other than the fact I have such respect for the Border Patrol and ICE. And these people, they’re dying for leadership. There’s nothing, there’s no leadership.”

“You have to see the squalor. The children and, and frankly people that have come into the country when you look at what’s happening the dirt and the filth of those places.

“That’s why they’re not letting the press in. And frankly, if that were me the press would be going crazy. It’s a very dangerous situation.”

Last week Trump accused Biden of causing “death and human tragedy” by undoing some of his border policies, which Biden had deemed inhumane.

Joe Biden responds to Donald Trump’s interview with Fox’s @JudgeJeanine in which he said he plans to visit the border. Biden says: “I don’t care what the other guy does.” pic.twitter.com/ZeI0OcmMNO

Former President Donald Trump joined me with reaction to my #OpeningStatement and revealed when he might visit the southern border. Take a look: pic.twitter.com/euE1ocEBu3

.@POTUS asked me to lead our diplomatic work with Mexico, El Salvador, Guatemala, and Honduras. To address the situation at the southern border, we have to address the root causes of migration. It won’t be easy work—but it's necessary.