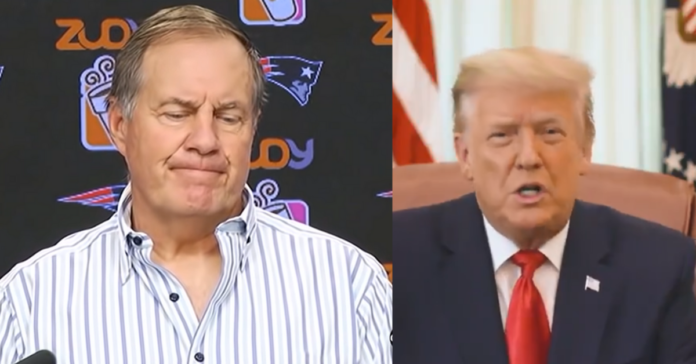 Belichick was friends with Trump and said of him in the past, “I think anybody that’s spent more than five minutes with me knows I’m not a political person. My comments aren’t politically motivated. I have a friendship and a loyalty to Donald.”

Jay Karen, chief executive of the National Golf Course Owners Association said, “You have millions of avid golfers who have a proverbial bucket list,” who want to play major tournaments like the P.G.A. Championship. “If you had a major coming to you and it was pulled from you that would certainly sting.”

From The Wall Street Journal:

News of the offer to Belichick only emerged Sunday, prompting questions over whether the most accomplished coach in football history would stand by his friend amid the controversy.

Belichick’s pivot is a sharp rebuke of a president who has faced calls from Democratic lawmakers, and some Republicans, to be removed from office. His decision comes just days after Trump awarded the medal to Gary Player and Annika Sorenstam, two of the best golfers of all time. Player and Sorenstam have faced criticism for associating with the president in the wake of recent events.

Belichick’s decision came as the pockets of the sports world that had remained supportive of Trump raced to dissociate themselves from the president during his final days in office. Late Sunday, the PGA of America pulled the prestigious 2022 PGA Championship from the Trump National Golf Club Bedminster, with the organization’s president Jim Richerson saying: “It has become clear that conducting the PGA Championship at Trump Bedminster would be detrimental to the PGA of America brand.”

On Monday the R&A, the body that oversees events such as the British Open, said it had no plans to stage its championships at the Scottish golf resort owned by Trump that has hosted four British Opens and two Women’s British Opens, “until we are convinced that the focus will be on the championship.”

Belichick’s close association with Trump has been on public display for some time. When Trump first ran for president in 2016, he read aloud a letter from Belichick at a rally that praised him, prompting the football coach to describe his “loyalty” to the president.