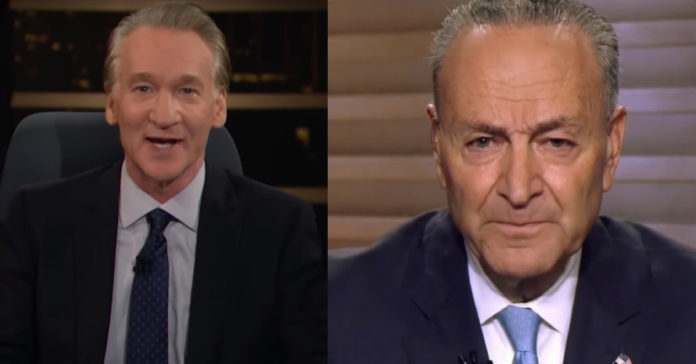 It begins…The coming electoral battle for the soul of America has officially kicked off and it will be a very interesting 2 months.

There is a simple choice on the ballot, despite what certain pundits and pollsters say, and the decision we make will determine the direction of the country over the next few years.

Trump is a deal maker so there is no doubt he will be able to make deals with whoever runs Congress, and that alone will probably make him a bunch of new critics, but the battle will be fierce to be sure.

Bill Maher fired the first shot with a stunning donation of a cool 1 million smackers into a Democratic PAC aligned with Chuck Schumer.

But Maher just didn’t give money, he also called out tech billionaires to also kick in cash to defeat Trump and the GOP at the ballot box.

Believe me, this is just getting started.

Comedian Bill Maher has made a $1 million donation to Senate Democrats in an effort to help the party retake control of the upper chamber – a move that comes after he bashed liberal billionaires for being ‘cheap f****’  who did not contribute enough to the party.

On his HBO show ‘Real Time,’ Maher has warned about Democrats being outspent by rich Republicans in the midterm elections this year.

He also called out billionaire tech titans like Jeff Bezos, Mark Zuckerberg, and Bill Gates for barely donating to Democrats in the 2016 election.

Democrats face an uphill battle to win control of the Senate with 10 of their incumbent senators running in states Donald Trump carried in 2016.

Schumer said in a statement to Variety: ‘I’m very appreciative of Bill’s generosity and urge all Americans to do everything they can to take back the Senate and restore our democracy.’

The comedian has never been shy about making his political opinions known.

His ABC late-night show ‘Politically Incorrect’ was cancelled in 2002 after Maher made insensitive remarks about the September 11th attacks.