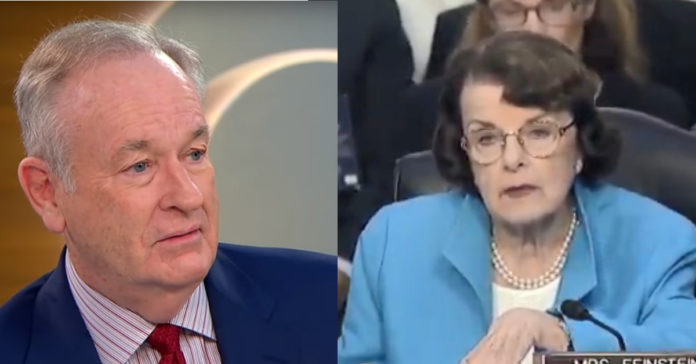 The smear campaign against Brett Kavanaugh is from an old and tired liberal playbook. They have a script for this type of dirty business and once they get the media to buy in it works nearly every time.

It won’t work this time for a variety of reason, which Bill O’Reilly went over in an interview today, but mainly because of Dianne Feinstein’s actions.

As Bill says they are highly suspicious. As reported by Newsmax:

O’Reilly was on “The Wayne Allyn Root Show” and addressed the controversy surrounding Kavanaugh, who is slated to return to the Senate Judiciary Committee in a week to answer questions about a woman’s claim he sexually assaulted her 36 years ago when they were in high school.

“Apparently she didn’t tell her parents because there’s nothing on record that her parents went to the school that Kavanaugh attended or Kavanaugh’s parents,” O’Reilly said. “They lived in the same neighborhood. Apparently [the accuser] Christine Ford, as reported [was] almost raped and killed — that’s what she says now — didn’t bring it to her parents’ attention. How likely is that to happen?”

O’Reilly went on to cast doubt on the evidence that has been made public, including inconsistencies with Ford’s claim of two boys being in the room when the alleged assault occurred. A psychologist she spoke with about the allegation in 2006 wrote in his notes there were four boys.

Further, O’Reilly noted Sen. Dianne Feinstein, D-Calif., kept quiet about Ford’s letter for several weeks before it leaked last week. There is also an issue with the lawyer Ford hired.

“Any senator would have turned the letter immediately over to the FBI and said, ‘look, there’s evidence here that needs to be checked out thoroughly,'” O’Reilly said. “No, Feinstein didn’t do it. Sat on the letter. Very, very suspicious. Very irresponsible.

“Then, Christine Ford apparently hires a lawyer named Debra Katz. This is key. Debra Katz is a far-left activist, not a regular lawyer. She actually attacked Paula Jones when Jones leveled serious charges against President Clinton. She defended Al Franken, this lawyer Katz did. She has donated to moveon.org. This injects heavy duty politics into the assault charge. So, now we’re in the political realm.

“But the evidence doesn’t stack, does it Wayne? Does it stack?”