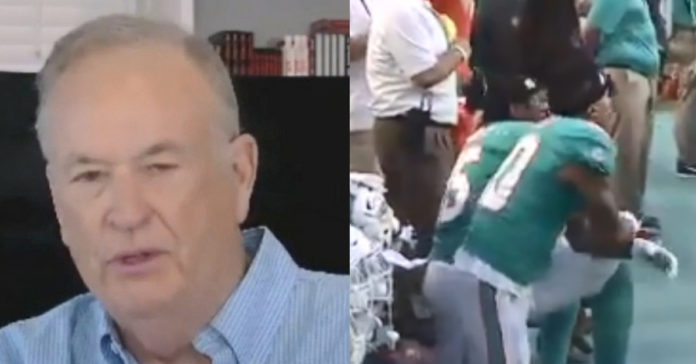 The NFL season is about to start and the protests are already going full tilt ahead. These players are simply exhausting.

Stubborn and exhausting. They need to get with the program and stop the nonsense before they kill the golden goose.

But they can’t and after Trump tweeted this out the players dug in their heels and disgraced the flag in the first week of pre-season.

“A football game, that fans are paying soooo much money to watch and enjoy, is no place to protest,” he tweeted last week. “Most of that money goes to the players anyway. Find another way to protest. Stand proudly for your National Anthem or be Suspended Without Pay!”

Trump is right and everyone but the players will admit it. So Bill O’Reilly decided to help cut through the clutter on this important issue with a brilliant idea.

“The NFL has to wise up and say, ‘You … want to kneel, you can stay in the locker room. If you come out of the locker room, we’ll fine you $10,000 at the first offense, and at the second offense we suspend you.’”

“The police are the target of many of these kneeling protests, and the narrative put forward by some players is that American police officers actively hunt down young black men,” O’Reilly said. “Those of us who understand statistics and know criminal justice know that is not true. …

“These players are kneeling for a fallacious reason, so I’m happy the police are fighting back…”

Then he dropped the dagger,

Correct. Last I checked they have pro football up there.