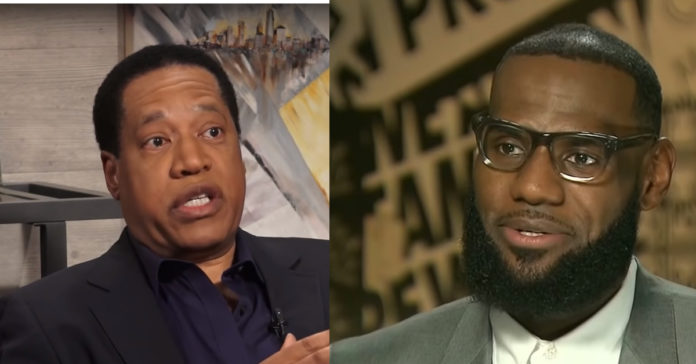 Larry Elder has had enough of LeBron James and Don Lemon taking potshots at President Trump.

If it would be one thing if they knew what in the hell they were bitching about so Larry Elder stepped in and schooled them.

“If Trump is using sports to ‘kind of divide us’ to quote LeBron James, what the devil has Colin Kaepernick done, and the players who followed suit?” Elder said on his Salem Communications show.

Elder added, “Is it Trump who forced Colin Kaepernick to a knee?”

In the August 2016, Kaepernick, playing for San Francisco, started the anthem protest movement, which has included some players kneeling during the Star-Spangled Banner.

“I am not going to stand up to show pride in a flag for a country that oppresses black people and people of color” Kaepernick said upon the start of the movement.

Trump has been very critical of the anthem-protesters.

Elder agrees with James that sports should be fun.

“I agree with what LeBron James said that sports is about fun,” Elder said. “Especially if you are a paying customer and you are coming to a sporting event and all of a sudden a civil rights protest breaks out. What is that?”

Elder believes the people trying to divide American are in the Democrat party, the one James supports. James endorsed Hillary Clinton for President in 2016.

“Democrats are using race to divide America, which in effect is what [James] is accusing Donald Trump of doing. Papa John’s CEO, on an earnings call, was trying explain why results weren’t good that quarter. He talked about the NFL and the kneeling, which caused a lot of people to not watch football and not order pizza. When he said that, he was accused of racism because most of the players in the NFL are black.

“So if it’s racist to just say player ought to stand and the NFL should deal with it, and that is using race, so what do you think [James’] party has been doing for decades?”

At this point, Elder played a string of soundbites of Democrats saying things the host believed were racially divisive, including Missouri Senator Claire McCaskill in 2006 after Hurricane Katrina, “George Bush let people die on rooftops in New Orleans because they were poor and because they were black.”

After playing the soundbites, Elder asked James, “Is that using race to divide America?”