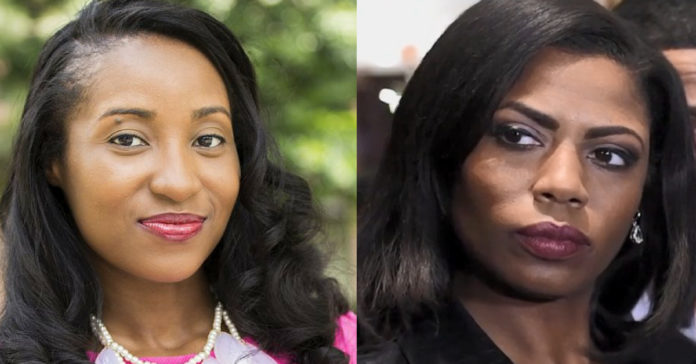 It’s a free country and they can do what they want, but they are not entitled to their own facts.

Patrice makes this very clear in her devastating history lesson below.

Patrice wrote: No one is surprised that Omarosa Manigault Newman’s new tell-all book is gossipy, salacious, and full of questionable or false allegations. What’s baffling, though, is how a woman who built a career on her closeness and loyalty to President Trump could now knock off Rep. Maxine Waters, D-Calif., as the president’s archnemesis.

Omarosa told the Hollywood Reporter in 2016, “Look at my career, the wealth and exposure that I’ve had; it’s very difficult to make the argument that Donald Trump doesn’t like black people and black women.” Last week, she changed her tune in reference to an alleged N-word tape saying, “Once I heard it for myself, it was confirmed, what I feared the most: That Donald Trump is a con and has been masquerading as someone who is actually open to engaging with diverse communities.”

When then-candidate Trump asked the black community “What do you have to lose?” by voting for him, he focused on poverty, unemployment, and poor schools. His pitch was that he would create more jobs and opportunities.

Minorities have made quantifiable progress under the Trump administration. Black pundits spin it away as the work of former President Barack Obama, and the mainstream media belittles it, but regular black folks are taking note. According to Rasmussen, 36 percent of blacks approve of the job he is doing — up from 19 percent one year ago.

The easing of daily financial and educational challenges is likely behind the notable rise in support for Trump among blacks. One of the biggest reasons for this is how the Trump administration’s policies are narrowing racial gaps between blacks and whites in employment.

Unemployment rates for blacks have remained at historically low rates throughout 2018, and that is commendable on its own. But the gap between unemployment for blacks and the general population is also narrowing. Under Obama, African-American unemployment averaged 12.5 percent, but that has dropped to 7.3 percent under Trump. In addition, the employment-to-population ratio for black Americans (averaged 58.3 percent) is 2.3 percentage points lower than for whites, the smallest gap on record.

On the higher education front, minority students benefited from spending increases in areas such as increased maximum Pell Grant awards and educational programs that help students from poor and middle-class backgrounds afford college.

Historically black colleges and universities, or HBCUs, have fared well under the Trump administration and GOP Congress. From the recent spending bill, HBCUs gained an additional $34.9 million, graduate programs that turn out blacks doctors, dentists, pharmacists, veterinarians, lawyers, and engineers received a 14 percent spending increase, and campus-based child care programs received an additional $34 million so that low-income students who are also parents can further their education. In addition, Congress forgave $330 million in Hurricane Katrina cleanup-related debt held by a handful of New Orleans-area HBCUs.

And furthermore, a criminal record may no longer have to be a stumbling block to people of color if this administration’s meaningful effort at prison reform is successful. Our hearts were touched after Trump commuted the sentence of Alice Marie Johnson, a grandmother serving a life sentence for a first-time, nonviolent drug offense. That was a one-off, but the president is looking at systemic change.

Trump has convened governors, officials, and clergymen to discuss successful justice system reforms that can reduce crime, keep low-level offenders out of prison, and give former inmates a better chance at starting a productive life. He recently signaled openness to a new proposal on prison and sentencing reform that enjoys bipartisan support in the House and Senate. Jobs, workforce training, education, and second chances go beyond simple engagement with people of color to actually improving their futures.

Disparaging Trump for his rhetoric about people of color is popular among black politicians and media pundits. Omarosa assumed that repeating a common refrain about him being racist would catapult her to instant stardom in the so-called “Resistance” movement. But despite her attention-seeking antics, blacks are increasingly recognizing they have a lot to gain from the Trump presidency. The rest is just noise.