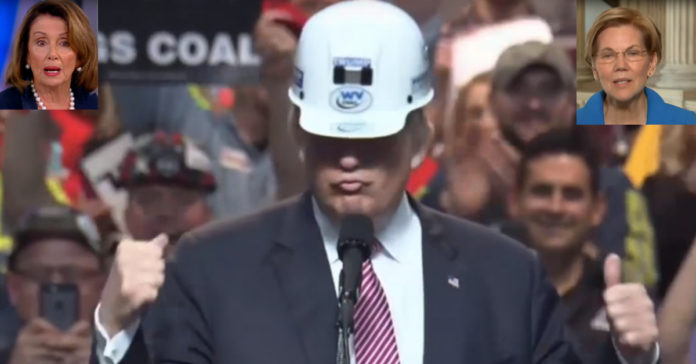 The Democrats have no one to blame but themselves. They sold out their base years ago when the Clinton’s took the money over the voters.

They have faced a devastating series of electoral losses since. They have been wiped out in the states and are getting crushed in Congress.

The midterms will be huge and if the left loses again there is no coming back, it is that bad. And a new report about blue-collar workers should terrify Pelosi and Schumer, it is that devastating.

They pay attention to the economy and specifically how it affects them. It’s pretty simple actually, despite what the media will tell you, and this is still how most people vote.

As reported by The Free Beacon: Nearly two years into the Trump presidency, blue-collar workers are increasingly optimistic about their social and economic circumstances.

A new survey, conducted by the Harris Poll, found that 85 percent of blue-collar workers said their lives are advancing in “the right direction.” The survey, commissioned by Express Employment Professionals, took place between July 9 and July 23. Data were collected from 1,049 blue-collar workers from across the nation who are employed in professions requiring manual labor.

Across the board, the results indicate America’s blue-collar workforce is sanguine about the nation’s current economic outlook and their own standing. Apart from the 85 percent of blue-collar Americans who said their lives are going in the right direction, 69 percent said their local communities are on the right path, and 58 percent view their states as being on a positive course.

The poll found 51 percent of blue-collar workers believe the country is heading in the right direction, a figure 12-percentage points higher than the 39 percent recorded amongst all Americans in a similar July Harvard-Harris Poll.

Overall, 55 percent of blue-collar Americans expressed they were better off today compared with five years ago.

Among those with children, 88 percent of respondents indicated they believed their children were likely to attain a better future. This stands in stark contrast to data collected by the Pew Research Center in 2017, which showed only 37 percent of Americans believing their children would grow up to be better off financially.

Bill Stoller, the CEO of Express Employment Professionals, said his organization commissioned the poll to ascertain the optimism of blue-collar Americans, especially since so much attention is being paid to the group ahead of the 2018 midterms.

“There’s been a great deal of chatter about the future and frustrations of America’s blue-collar workers,” Stoller said. “Our survey reveals that blue collar workers are upbeat, optimistic, and proud of the work they do. While the news is often full of stories about economic anxieties, this survey shows workers who are exceptionally optimistic.”

In July 2018, the economy added 37,000 manufacturing jobs, boosting the total number created in the sector in the past 12 months to 327,000—the fastest rate of growth in 23 years. Likewise, the construction industry has added over 308,000 jobs in the past year, according to the Bureau of Labor Statistics.

The soaring economy, buoyed by the president’s tax cut package, has also translated into increased wages and bonuses for the American worker.

Over two-thirds of blue-collar workers—68 percent—reported receiving a pay increase in the past year, according to the Harris Poll. Of those who received a pay increase, 39 percent of respondents stated their raise equaled more than 5 percent of their annual earnings.

Despite the strong economic optimism found among blue-collar Americans, the group as a whole holds low opinions of elected officials and partisan politics.

Approximately 70 percent of the poll’s respondents expressed distrust in “elected government officials” and only 51 percent said the federal government advocates pro-business policies. On the topic of partisan affiliation, 39 percent said the Republican Party did a better job of helping blue-collar workers, compared with 36 percent who said the same of the Democratic Party. Almost one in four believed neither party did a sufficient job of helping blue-collar Americans.

Such numbers don’t bode well for the Democratic Party, which has long been identified as the home of blue-collar and working-class voters. A breakdown of voting patterns from the 2016 presidential election shows Trump did exceedingly better among this constituency than previous Republican contenders for the White House.