You Don’t Mess Around With Kelly Ann Conway

If there is one person from the Donald Trump campaign and now transition team that the lying liberal should know not to mess with it’s Kellyanne Conway. Conway, the first female to ever run a successful presidential campaign, never gets flustered by the mainstream media’s outrageous questions and accusations.  Whatever they hit her with, she comes back with a witty retort and hits them back twice as hard. (VIDEO BELOW)

After CNN’s Alisyn Camerota came at her with slanderous and accusatory questions about Donald Trump during the campaign, Kellyanne came back at her so quickly, so “on spot” and so powerfully that I really pitied poor Ms. Camerota (here’s a link to that article).  It was like a knockout punch in a boxing match. Bam! Pow! (VIDEO BELOW)

You can’t take that away from us. I mean we busted the blue wall in states like Michigan, Pennsylvania, Wisconsin and for them to pretend that it just because of this issue is not just insulting, it’s empirically false.  And Chris all they needed to do was have a compelling, sticky, persuadable, aspirational message to the American people. If you can sit here right now and tell me, as a brilliant political mind, what Hillary Clinton’s message was… I’m listening!  What was it?  All I heard was “we’re not Donald Trump”. That’s not a message! That’s a screen.  They lost. They should have won but they lost. 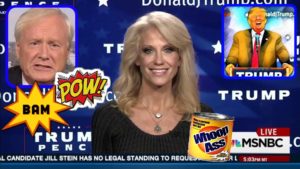 Look scapegoating white supremacy,  scapegoating with Jim Comey, Russian interference, fake news, Bernie Sanders.  He had that he should he had the audacity to run?  Why did he do that?  How bout he won 22 states and 13 million voters and they never fully assimilated he back in.

And then anytime I respond, anytime  I defend myself against these specious allegations that are now leading to death threats. So I really resent it. Anytime I try to respond, I’m seen as ungracious.  Why are we sore winners? I’m not a sore winner.  I’m a winner!  My guys winner! He’s the next president United States. This has to stop Chris is incendiary rhetoric of people who just can’t admit that they lost. It has to stop because it’s costing a lot of it’s costing a lot of angst.

Here’s the link to the Kellyanne vs CNN’s Alisyn Camerota story!  Brutal!!

If you agree with Kellyanne Conway, Please SHARE this!