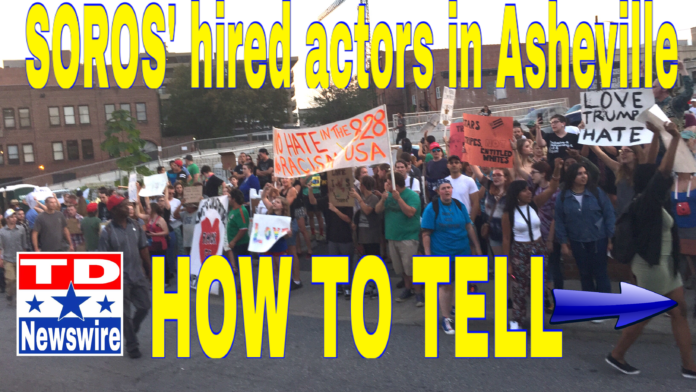 Last night the US cellular Center in Asheville North Carolina, Donald Trump spoke to a capacity crowd of over 9,000 people while more than 1,000 additional Trump supporters waited, hoping to get in. In addition there were and an additional 200 to 300 protesters outside.

The circus of protesters ranged  from clowns to hobos to every type of circus freak imaginable. Plus quite a few typical looking Asheville youth.   For the most part the protesters  were peaceful however many of them had the F word and other expletives on their signs and yelled the F word quite frequently.   SEE INCREDIBLE VIDEO BELOW 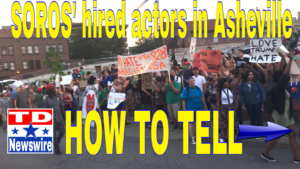 Strange would be an understatement for this crowd. However if you pay really close attention you would notice something even stranger. These people were totally scripted and were acting their parts.   They all said the same things and did not deviate from their script.  And not ONE SINGLE Pro-Hillary sign was to be found  or one single mention or Hillary or “vote for Hillary” was heard.

I taped this video.  Please watch and then I will give you a list of the dead-give-aways that these are George Soros’ paid “actors” and VERY few of them just came to actually protest without getting paid.  After you watch and then read the list you will be able to spot the few “real” protesters very easily.  One hint.  They are not allowed to discuss or mention Hillary and are not even allow to acknowledge that they know who she is.  I’m serious.  Watch this and please SHARE with everyone you know.

These were professional paid protesterS, actors if you will.

6 Ways to Tell these are paid protesters

Please watch the video again now and tell us what you think.  Thank you and God Bless!