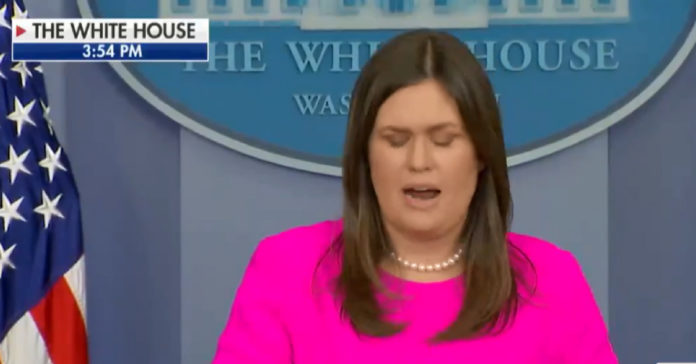 Sarah Huckabee Sanders just broke her silence on the restaurant incident over the weekend and she is as classy as she is smart.

Sanders opened the press briefing with a monologue about her experience over the weekend, explaining that she and her husband “politely left” the Red Hen restaurant in Lexington, Va., after the owner asked them to dine somewhere else.

“I was asked to leave because I work for President Trump. We’re allowed to disagree, but we should be able to do so freely and without fear of harm and this goes for all people regardless of politics,” Sanders said.

She continued, “Some have chosen to push hate and vandalism against the restaurant that I was asked to leave from. A Hollywood actor publicly encouraged people to kidnap my children. And this weekend, a member of Congress called for people to push back and make clear to those serving our country and this administration that they are not welcome anywhere, anytime, for anything.”

Sanders was referring to Democratic Congresswoman Maxine Waters, who told MSNBC over the weekend she had “no sympathy for the people in this administration” who have often been heckled during private outings.

“Healthy debate on ideas and political philosophy is important and the calls for harassment and the push for any Trump supporter to avoid the public is unacceptable,” she said.

.@PressSec: "The calls for harassment and push for any Trump supporter to avoid the public is unacceptable." pic.twitter.com/7wC1Xl0cWW