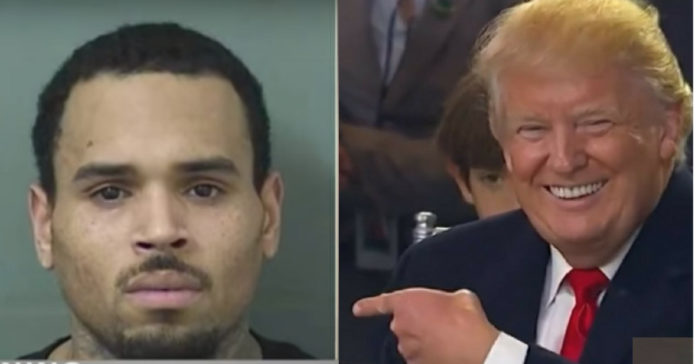 Karma is never kind to Hollywood liberal hypocrites. They, against all advice, must pontificate on things they know nothing about.

When it goes bad it goes bad as it just did for one of the most virulent anti-Trump celebrities, Chris Brown. This being his second offense he may be locked up for quite some time.

Pop star Chris Brown was arrested in Florida Thursday following a concert for an outstanding warrant for felony battery.

A sheriff’s spokeswoman said the entertainer was released after posting $2,000 bond on the battery charge issued by the Tampa Police Department. No details about the allegations in the arrest warrant were immediately available. Brown was performing at the Coral Sky Amphitheatre in West Palm Beach when he was put into handcuffs by officers who were waiting for him, TMZ reported. Brown is currently in the middle of his Heartbreak On A Full Moon Tour.

The 29-year-old entertainer’s record of violence includes a guilty plea to felony assault for beating up his then-girlfriend pop superstar Rihanna in 2009 and a 2016 arrest on a charge of assault with a deadly weapon.

A judge ordered Brown in February of 2017 to stay away from his ex-girlfriend Karrueche Tran after she accused him of physically abusing and threatening her.

The Grammy winner was ordered to stay 100 yards away from Tran and not attempt to contact her after she wrote in court filings that Brown had repeatedly threatened her.

Tran also accused the singer of punching her in the stomach and pushing her down a flight of stairs. Her filing does not offer any additional specifics or note if she reported the events to police.

The troubled star also has a history of criticizing President Donald Trump.

In August of 2017, Brown blasted President Donald Trump on social media after the president made jokes about reprimanding deadly MS-13 gang members.

Although President Trump’s comments were met with laughter, Brown was outraged.

“WHAT IN THE ACTUAL FU–?????! HE GIVING POLICE MORE RIGHT TO FU– UP YOUNG BLACK MEN!!” the singer wrote in a foulmouthed Instagram post.