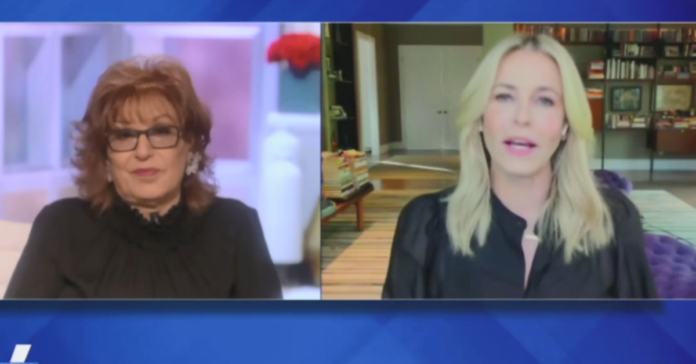 Co-host Joy Behar asked Chelsea Handler how therapy helped her deal with her “rage against Trump,” and the comedian stunned the audience by saying she used to assault Trump supporters to deal with her rage.

She said, “Oh my God. Well, I would walk into the airports, I would go to the first class lounge, check in and then run over to the Fox News section and start assaulting people.

“Then I would run back into the Fox News section and I would go, are you still a racist?

“I mean, I was out of my tree, and my level of outrage was just not — I couldn’t handle it anymore. I was just — my veins were throbbing and I wanted to learn how to talk to Trump supporters or conservatives at this time in 2016.

“Now Trump supporters, I don’t have anything to say to them anymore at this juncture, but I wanted to be able to have the conversations that I was being prevented from having because of my anger.

“So that really was the way to get into therapy and then I realized my anger, yes, I hate Donald Trump. Yes, I find him to be a white supremacist and I find all of his policies to be abhorrent, but my real anger was something that happened to me as a child that I had never dealt with. When we don’t deal with our injuries, they creep up on us and tap us on the shoulder when we least expect it.”

On the 50 Cent controversy Chelsea said:

“Yes, and I understand. He called me the other night, two nights ago. We spoke for about a half an hour, and I, you know, I texted him.

“I DM-d him and I said, can you please call me about this? I don’t want this to be public because I want to know if you are serious about supporting Trump. So he called me and he wasn’t serious. He was just screwing around on his Twitter.

“So and then we talked and, you know, had a cute little conversation. I did promise, you know, to pay his taxes and then I found out it’s illegal to pay somebody to vote for your candidate.

“So I offered him another form of payment and we’ll see if he takes me up on it, but I don’t have to pay him. He’s already a Biden supporter.

.@chelseahandler tells us her ex 50 Cent “wasn’t serious” about supporting Pres. Trump after she spoke with him on the phone following his recent social media posts: “He is supporting Joe Biden, he made that very clear to me.” https://t.co/x4Xt4kfe4a pic.twitter.com/jz95itN4BB