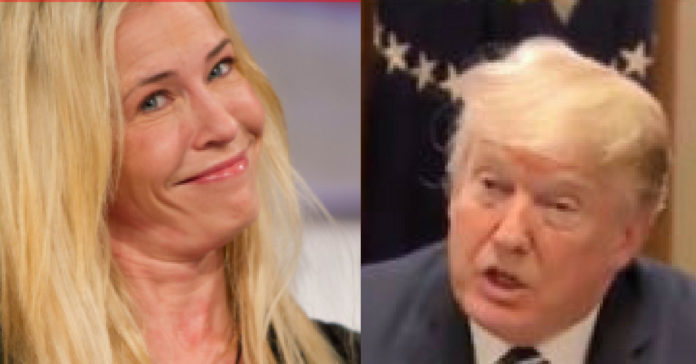 Chelsea Handler continues to disgrace with her vicious attacks on President Trump. Just when we thought she had gone away, she is back and worse than ever.

As reported by Buzzfeed:  Chelsea Handler, the staunchly anti-Trump comedian and activist, told BuzzFeed News’ Profile on Sunday her dad “would be like Donald Trump if he could.”

“I have an asshole for a father,” she told Profile host Audie Cornish. “I yelled and screamed at him my whole life.”

This motivated her decision in August to call out White House senior adviser Ivanka Trump for her silence on the Trump administration’s policy on family separations.

“To see that kind of behavior, with a lot of power, and a daughter who sits idly by when there are children in cages at the border — I mean, what land are we living in?” Handler said of Ivanka’s relationship to her father.

As for President Donald Trump himself?

“I want that man dragged out of the White House in his underwear with his little hairpiece flying around and the tape coming off and it landing in the Rose Garden,” Handler said.

Handler’s critique of the Trump administration is part of her recent forays into activism at large.

The star announced in October last year that she was leaving her Netflix talk show Chelsea to focus on political engagement, saying that she was going to speak at colleges. She has also partnered with EMILY’s List to help boost that group’s effort to get more Democratic women who are pro–abortion rights elected to office.

On Sunday, Handler said that she believed the election of President Trump helped mobilize people around the #MeToo and Time’s Up movements.

“I think that we all realize what’s at stake and so people are really willing to stick their necks out and fight,” she said.

Here’s the thing – Mueller’s case if falling apart – Manafortit turns out is not a slam dunk case and Papadopoulos is not cooperating as previously thought.

She has been duped by the liberal media into thinking Trump’s removal by Mueller was imminent.

And she is not the only one who fell for it – but the truth remains, Trump will likely serve 6 more years.

Whatever … “Post-Employed,” Talent-Challenged Chelsea Handler Unhinges Up About Fox News