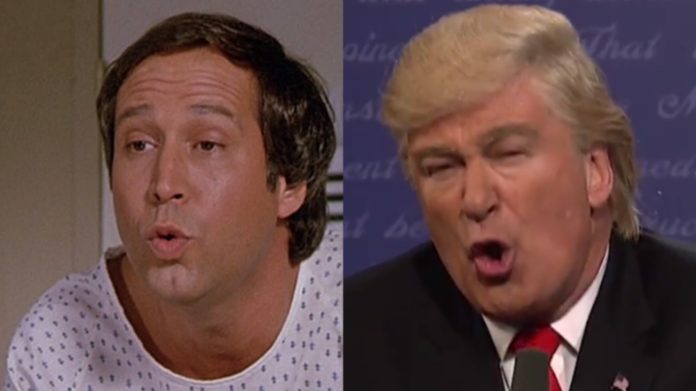 Lorne Michaels, the boss at Saturday Night Live, once gave Rosie O’Donnell some famous advice when she begged to play Steve Bannon in a Trump bashing skit.

Lorne told her comedy is never funny when it is based solely on hate. Hate and anger are not funny which is why SNL is turning off viewers in droves.

Something Chevy Chase had no problem reminding them. As reported by Fox News:

Former “Saturday Night Live” star Chevy Chase slammed the late night show and its creator Lorne Michaels in an interview published Wednesday for what he called “the worst f— humor in the world.”

Speaking to The Washington Post, the 74-year-old Chase, one of SNL’s original cast members, said that while he didn’t want to offend Michaels or the show’s current cast, he’s “amazed Lorne has gone so low.”

“I just couldn’t f— believe it,” Chase said of the current show, set to premiere its 44th season. “That means a whole generation of s—heads laughs at the worst f— humor in the world.”

“You know what I mean? How could you dare give that generation worse sh– than they already have in their lives? It just drives me nuts,” Chase told the newspaper.

The “Caddyshack” star, who was featured on the show during its first one and a half seasons, said the show “went downhill” after its first two years on air. “Why am I saying that? Because I was in it? I guess.”