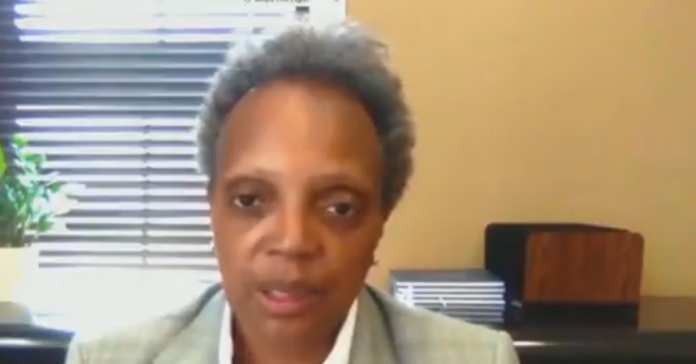 Lori Lightfoot is clueless as the surge in violence in Chicago continues with no end in sight. Lightfoot lost the confidence of the police and the residents long ago and is just moving on auto-pilot now.

At least 40 people were shot and wounded across Chicago over the weekend. Six of those victims were shot dead.

From The Chicago Sun-Times: A male was in the 4900-block of West Hubbard Street when three people approached him and one of them opened fire, Chicago police said.

The male was struck multiple times in the back and pronounced dead at the scene, police said.

One person was killed and another wounded in a shooting during an attempted robbery Sunday morning in West Town, police said.

About 4:30 a.m., a 28-year-old man was walking in the 1200-block of West Fry Street when an unknown male approached him on foot, showed a handgun and demanded his belongings, Chicago police said.

The male then shot the 28-year-old in the leg, according to police.

The 28-year-old then ran from the scene but as he was running he heard multiple gunshots, police said.

When officers arrived on the scene they found the unknown male unresponsive in the alley with multiple gunshot wounds, police said.

The unknown male was transported to Northwestern Memorial Hospital where he was pronounced dead, according to police, while the 28-year-old was taken to Stroger Hospital in good condition.

The Cook County medical examiner’s office has not released information on the fatality.

A 53-year-old man was in a vehicle about 1:05 p.m. in the 3100-block of North Sawyer Avenue when a light-colored vehicle pulled up and someone inside opened fire, Chicago police said.

The man was shot in the back, head and taken to Illinois Masonic Medical Center, where he was pronounced dead, police said.

In non-fatal shootings, three men and one teenage girl were wounded Friday in West Garfield Park.

The group was standing outside a residential building about 10:50 p.m. in the 4400-block of West Adams Street when someone fired shots from the street, striking all four people, according to police.

A 17-year-old girl suffered gunshot wounds to the leg and elbow, while a man, 40, was struck once in the leg and another man, 53, was shot twice in his leg, police said.