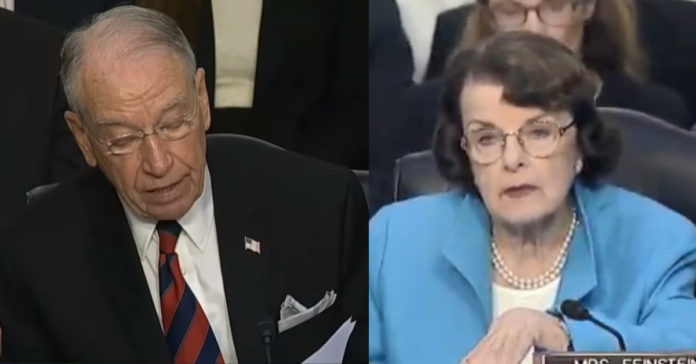 Chuck Grassley just exposed Dianne Feinstein as the worst kind of hypocrite as her smear campaign falls apart, which was easily predicted.

30-year-old charges rarely if ever stick or turn out the way the way the people using the stories for political gain expect.

Take Dianne. She made her move and expected a fierce backlash from the media and from the GOP.

She could use these responses to further fan the flames.

Never in a million years did she expect that Chuck Grassley would try to work with her and her answer to the olive branch is very telling.

The allegations against Kavanaugh surfaced Sunday after his accuser, Dr. Christine Blasey Ford, granted an interview to The Washington Post. Ford detailed how she sent an anonymous letter to Feinsten regarding the alleged encounter months earlier. Feinstein said she forwarded Ford’s letter to the FBI for review but never made the allegations public until stories began to surface around the letter itself after Kavanaugh’s confirmation hearings ended.

Feinstein “has had this information for many weeks and deprived her colleagues of the information necessary to do our jobs. The minority withheld even the anonymous allegations for six weeks, only to later decide that they were serious enough to investigate on the eve of the committee vote after the vetting process had been completed,” Grassley said.

The chairman explained that “the standard procedure for updates to any nominee’s background investigation file is to conduct separate follow-up calls with relevant parties. In this case, that would entail phone calls with at least Judge Kavanaugh and Dr. Ford,” adding, “I asked Senator Feinstein’s office yesterday to join me in scheduling these follow-ups. Thus far, they have refused. But as a necessary step in evaluating these claims, I’ll continue working to set them up.”

Grassley is now grappling with senators calling for hearings regarding Ford’s allegations and Kavanaugh’s own desire to defend himself. The judge issued a Monday statement saying, “This is a completely false allegation. I have never done anything like what the accuser describes — to her or to anyone.