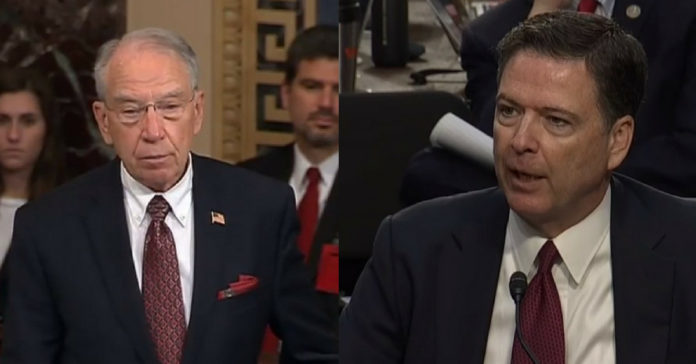 James Comey has some ego. He really thinks he knows best, above all others, such is his narcissism.

Look at what he did – he sunk Hillary Clinton and then tried to sink Trump.

He was given power and simply got drunk on it, such is the habit of small men. And now, according to Chuck Grassley, who grilled the DOJ inspector general today over Comey’s fate, Comey needs a lawyer.

He is specifically under investigation for his handling of memos he wrote about interactions with President Trump while FBI director.

“Comey said he did not expect a report on his handling of classified information because, ‘That’s frivolous.’ I don’t happen to think that it is frivolous,” Sen. Chuck Grassley said during a Senate hearing Monday.

“Question number one, Mr. Horowitz, are you investigating the handling of his memo and does that include the classification issues, and should Mr. Comey expect a report when it’s complete?” Grassley asked.

“We received a referral on that from the FBI. We are handling that referral and we will issue a report when the matter is complete, consistent with the law and rules that are–a report that’s consistent and takes those into account,” Horowitz responded.

Grassley: "Is the IG investigating Comey's handling of his memos about Trump?"
Horowitz: "Yes, we're investigating it and will produce a report on it."

This is big and Comey and his ego deserve what they get – everyone, even the left would agree with that.